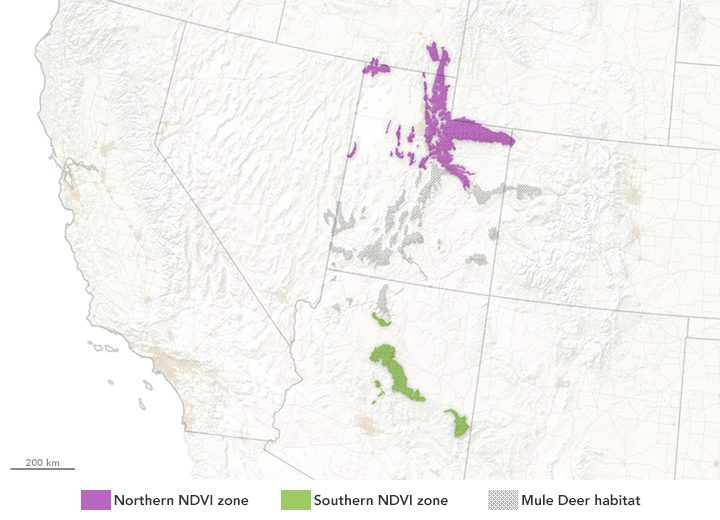 Raising a new fawn is no easy task. A mother mule deer needs a lot of food for herself and her growing fawn. New satellite-based research suggests that those mule deer mothers are in tune with their environment, with reproduction patterns closely matching the cycles of plant growth in their habitat.

Mule deer need a rich supply of vegetation for the late stages of pregnancy and for nursing their offspring after birth. For this reason, birth rates peak when food sources are increasing, shortly before the peak of annual plant growth. What is surprising is that mule deer in the colder, snowy northern parts of their range give birth earlier in the year than deer in the warmer southern reaches. Through a combination of satellite measurements and ground-based population counts, scientists can see the reason for the difference from space.

Mule deer, a commonly hunted species, are closely monitored and counted by biologists and land managers. A great deal of data about the size and health of the population is collected each year in order to determine the proper number of hunting permits to issue. At the same time, remote sensing scientists have a space-based way to track the health of vegetation. It is called the Normalized Difference Vegetation Index (NDVI), which is a measure of the “greenness” of the landscape. NDVI measures how plants absorb and reflect light; the more infrared light is reflected, the healthier the vegetation. So by measuring the greenness of the mule deer habitat, scientists were able to mark the beginning and peak of the plant and deer growing season.

The map above shows the range of mule deer from southern Idaho to central Arizona. The habitat is divided into a green southern zone, a purple northern zone, and a gray transition zone. The mean NDVI for the northern and southern regions is displayed in the graph, which plots the vegetation index for each day of the calendar year. NDVI was measured by the Moderate Resolution Imaging Spectroradiometer (MODIS) instruments on NASA’s Terra and Aqua satellites.

According to lead author David Stoner of Utah State University, vegetation greenness in the northern latitudes peaks earlier than in the southern latitudes. Since nutrient-dense food sources were available earlier in the year, there was more food available for mule deer mothers and babies at the time when they needed it most. That greenness is partly a result of a consistent steady stream of snowmelt moisture feeding the deeply rooted mountain vegetation.

“We had never tracked the deer population this way, and we had never been able to predict it with such precision,” said Stoner. “We can estimate the start and peak of the season using satellite imagery, and then we can map and predict when the deer are giving birth.”

In southern latitudes, on the other hand, the plants are more dependent on rain from summer monsoonal showers. This means vegetation quality peaks later in the year, after a brief drought that comes before the summer monsoons. As a result, does give birth later in the south than in the north.

“This kind of applied research is very important for making remote sensing data relevant to wildlife management efforts,” said Jyoteshwar Nagol, a researcher at the University of Maryland. Deer have a huge economic impact in the United States, from hunting to crop damage to car accidents. As regional climates shift or droughts occur, deer could migrate farther or expand their range to find food. 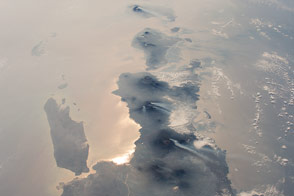 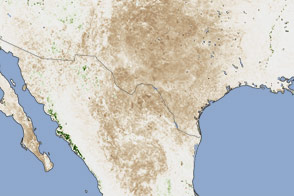