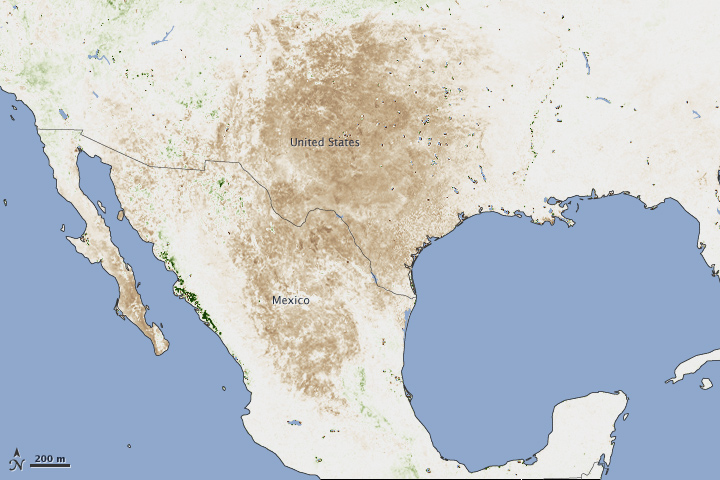 The growing season of 2011 was not kind to the southern United States and northern Mexico. As racing fires, heat, and record-dry conditions in Texas claimed attention, crops were quietly failing across the border in northern Mexico. In January 2012, the impact of the drought came to public notice, as communities began to suffer severe food shortages. On January 17, the Mexican government announced that it was distributing food to particularly hard-hit indigenous Tarahumara communities in northern Mexico’s Chihuahua state.

This image shows vegetation growth between July and September, the heart of the growing season. The image was made with data from the Moderate Resolution Imaging Spectroradiometer (MODIS) on NASA’s Terra satellite, which measures both near infrared light and visible light. Healthy plants absorb visible light and reflect infrared light. By comparing the amount of visible and infrared light reflected from a region, scientists can estimate the density of healthy plants, a measurement called a vegetation index. In this case, the vegetation index from the 2011 growing season is compared with the average vegetation index observed between 2000 and 2010. Areas in which plants grew more than average are green, and areas where plants grew less are brown.

Drought clearly slowed plant growth in both the United States and Mexico. The drought is the worst in northern Mexico in 71 years, the Mexican government reported. The 2010-2011 La Niña likely contributed to the drought’s severity.

Drought in the Rockies

This spring and summer the Rocky Mountains have been relatively dry.