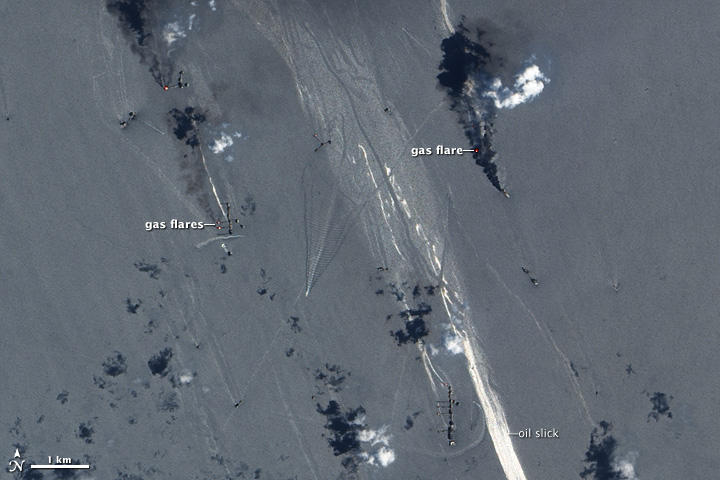 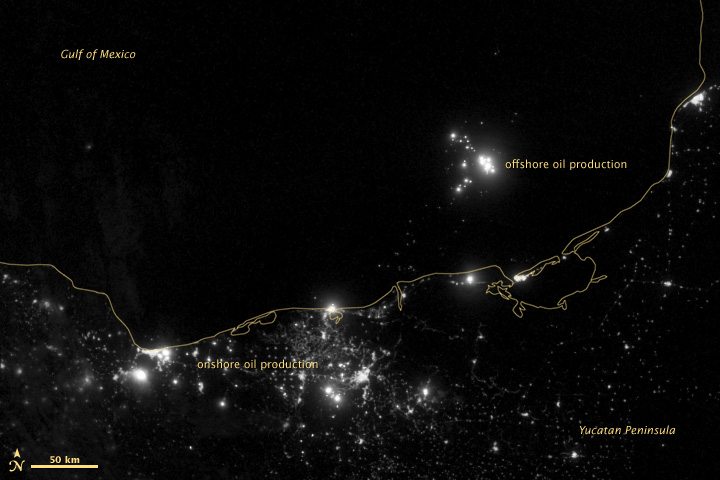 In the early 1970s, oil exploration turned up vast reservoirs of oil and gas under the Bahía de Campeche, located along the southern margin of the Gulf of Mexico, just west of Mexico’s Yucatán Peninsula. Offshore oil drilling continues in that region today, and signs of the activity are visible from space.

Crude oil often contains natural gas. When buried deep underground, the natural gas stays dissolved in the oil due to high pressure. But as the oil nears the surface and pressure decreases, flammable gas (mostly methane) bubbles out. Many oilrig operators try to preserve the gas for use by customers, but depending on the situation, some operators may instead choose to burn it. Sometimes the gas is burned because it is contaminated with mud or other substances. In other cases, there may be no other way to quickly and safely dispose of it.

On September 13, 2009, the Advanced Land Imager (ALI) on NASA’s Earth Observing-1 (EO-1) satellite captured a natural-color image of gas flares and an oil slick in the Bahía de Campeche (top). Sunglint—sunlight reflecting off the ocean surface and back to the satellite—gives the ocean a silver-gray appearance and also illuminates the oil slick, which smoothes the ocean surface. (For more information on oil slicks and sunglint, see Gulf of Mexico Oil Slick Images: Frequently Asked Questions.)

Nearly three years later (July 26, 2012), the Visible Infrared Imaging Radiometer Suite (VIIRS) on the Suomi-NPP satellite captured a nighttime image of city lights and of oil production (bottom). Gas flares appear as extremely bright central spots, surrounded by a circular halo. Electric lights in cities and oil production sites vary in brightness, and do not have a halo.

Methane is a potent greenhouse gas—roughly 23 times as powerful as carbon dioxide. When pure methane is burned completely, the combustion process creates carbon dioxide and water. Unfortunately, gas flares in oil drilling operations rarely burn all of the methane, so some is released into the atmosphere. Because unprocessed natural gas often contains other substances besides methane, flares at oilrigs can produce other compounds such as carbon monoxide and nitrous oxide.

NASA Earth Observatory images created by Jesse Allen and Robert Simmon, using Advanced Land Imager data from the NASA EO-1 team and VIIRS Day-Night Band data from the Suomi National Polar-orbiting Partnership (Suomi NPP). Suomi NPP is the result of a partnership between NASA, the National Oceanic and Atmospheric Administration, and the Department of Defense. Caption by Michon Scott. 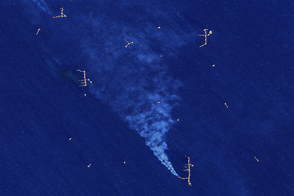