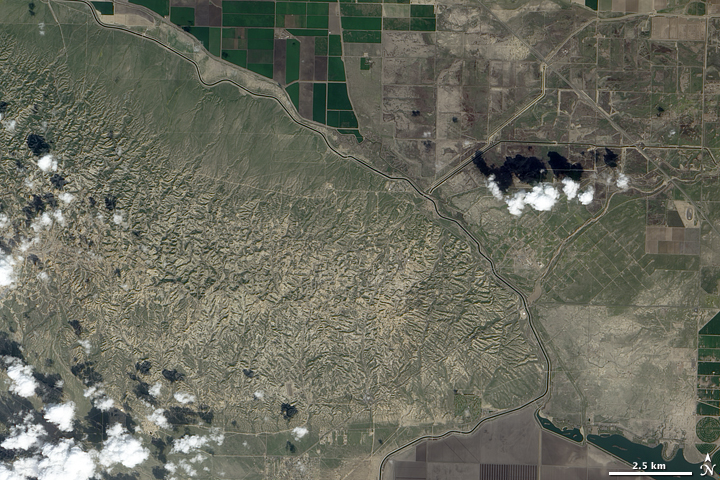 Elk Hills Oil Field in California’s San Joaquin Valley ranks among the most productive oil fields in the United States. Discovered in 1911, the oil field was embroiled in a 1920s-era lease scandal, returned to the management of the United States government, and privatized again in the 1990s. Serving as a contingency source of oil for the U.S. Navy (Naval Petroleum Reserve 1), the oil field experienced little drilling until the oil crisis of the 1970s. At that time, the United States began extensive drilling of Elk Hills as part of a larger effort to increase domestic supplies of energy.

The Advanced Land Imager (ALI) on NASA’s Earth Observing-1 satellite captured this image of the Elk Hills Oil Field on March 7, 2009. In this true-color image, the oil field presents a complicated surface—a combination of hilly terrain and human development, with gravel roads and bare ground surrounding oil wells alternating with vegetated land. A canal separates the oil field from nearby agricultural lands, which appear as neat rectangles of varied shades of green. In contrast to the oil field, the surrounding agricultural fields rest on flat land.

Under the surface, Elk Hills may be even more complicated that its outward appearance suggests. Although the oil field occupies a single large dome, the area consists of multiple, distinct oil- and gas-producing sites. Seismic movements along the San Andreas Fault, southwest of this oil field, have deformed the subterranean rocks, helping to trap reservoirs of oil. Underground complexity, however, has not prevented geologists from tapping this oil-rich resource. In September 1992, the Elk Hills yielded its billionth barrel of oil, becoming the thirteenth oil field in U.S. history to pass that milestone.