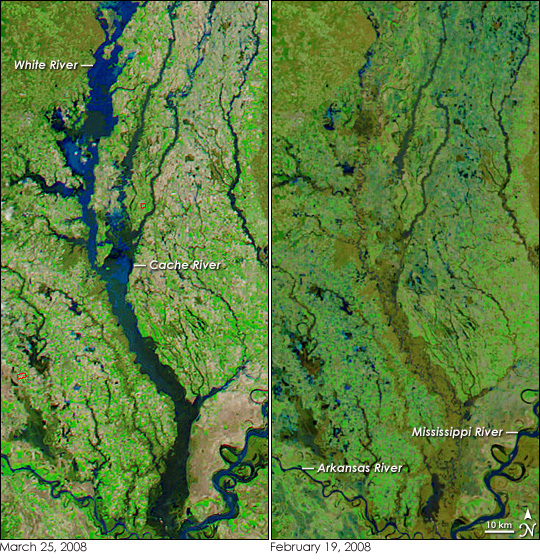 A full week after intense spring rain flooded rivers throughout the central United States, the White River in Arkansas was still running high. The Moderate Resolution Imaging Spectroradiometer (MODIS) on NASA’s Aqua satellite captured the left image of the swollen river on March 25, 2008. Shown in a combination of infrared and visible light, the river ranges from dark blue to black, while the surrounding farmland is tan, where few or no plants are growing, and bright green, where plants are growing. Fires are outlined in red. The image on the right, taken on February 19, 2008, shows the river system before the start of the spring floods.

At the time the flood image was taken, the floods on portions of the White River were near their peak, according to the National Weather Service. The image shows the lower reaches of the river where it flows into the Mississippi River. Though major floods were still in progress on March 27, water levels in regions towards the top of the image were dropping. The southernmost portion of the river was expected to remain flooded for several more days as floods upstream drained, said the National Weather Service.

The large image includes a much wider region. The large image reveals that the Mississippi River was flooded upstream of its junction with the White River. Daily images of the United States are available from the MODIS Rapid Response System.

Widespread flooding swept across the midwestern United States in the wake of a powerful early spring storm.

Image of the Day Land Drought World of Change