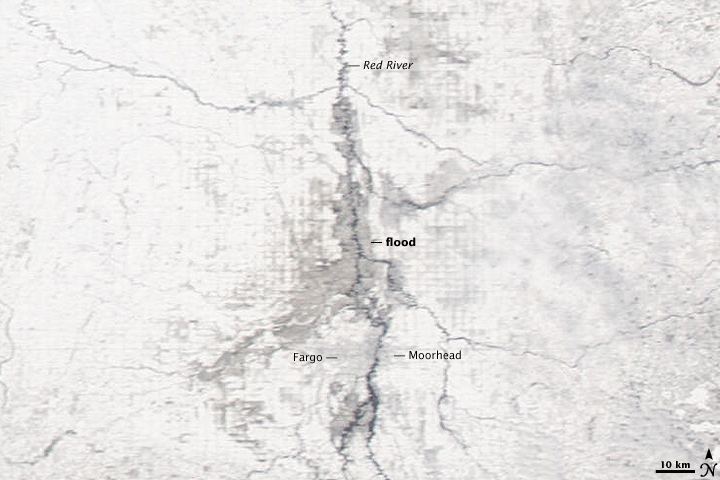 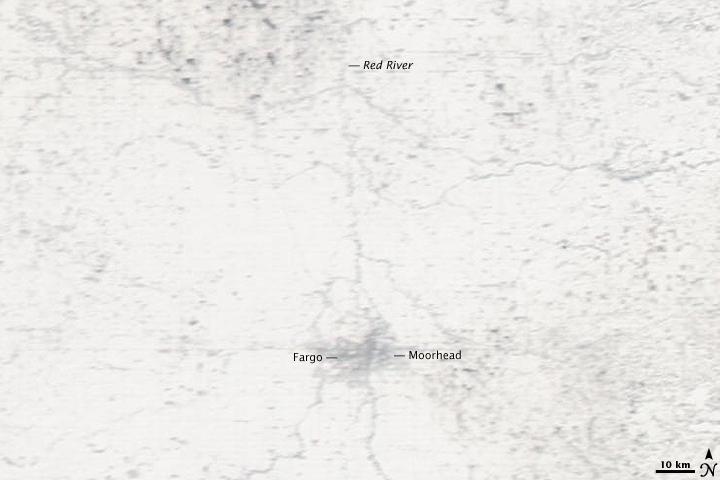 The Red River reached a record high of 40.82 feet at Fargo, North Dakota on March 28, 2009, after which water levels began to recede. Flood stage for the river is 18 feet, says the National Weather Service. The top photo-like image, taken by the Moderate Resolution Imaging Spectroradiometer (MODIS) on NASA’s Aqua satellite on March 28, shows the flooded river around Fargo. The scene is entirely white except for the slate gray squiggles formed by the Red River and its tributaries. The MODIS sensor on the Aqua satellite captured the lower image on March 14, 2009, before the floods started. The contrast between the two images makes it possible to gauge the extent of the flooding.

On March 14, the Red River was a single dark line in the frozen landscape. By March 28, the river had expanded. The gray-brown tones around the river channel are flooded regions. The water has spread into a wide lake north of Fargo, North Dakota, and Moorhead, Minnesota. The river is clearly flooded south of the two cities as well. The pavement and buildings of Fargo and Moorhead give the urban areas a darker color under the snow than the surrounding squares of farmland. The two cities straddle the river and are a slightly lighter shade of gray than the flood. The effectiveness of the levees is evident in the image: without the levees, the river would likely have flooded as it did up- and downstream of the cities.

The snow that covered the region in both scenes was both the cause of the flood and the reason that the water stopped rising. The river flooded as melting snow from a deeper-than-average snowpack filled the basin, said the National Weather Service, but the return of cold, wintery weather might then have slowed the rise, reported ABC News.