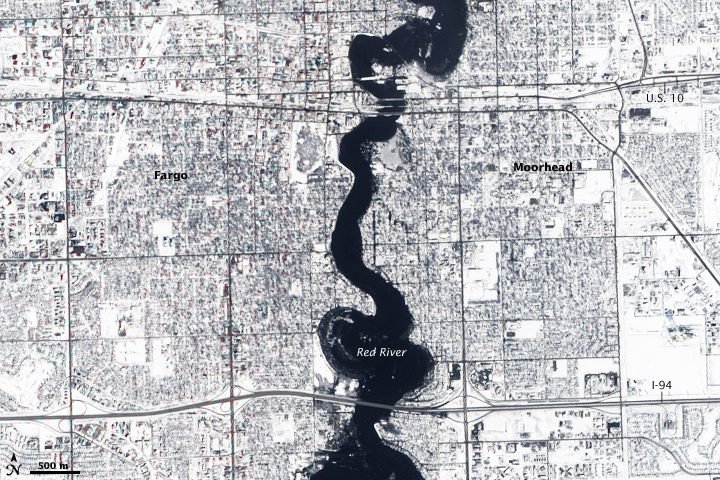 Held in place by reinforced levees, the swollen Red River snakes through Fargo, North Dakota, and Moorhead, Minnesota, in this image captured by the Advanced Land Imager on NASA’s EO-1 satellite on March 28, 2009. The river’s usual s-shaped curves north and south of Interstate 94 had been swallowed in a bulge of water. The main channel of the river is slightly darker than the flooded land in these areas, hinting at how extensive the floods are.

On the east side of the river, residents of Moorhead immediately north and south of the Interstate had evacuated by March 28. Some residents in Fargo near the top of the s-bend were also evacuated. In this region, the river is encroaching on the tiny, neat squares that indicate neighborhoods.

U.S. Highway 10 frames the top of the image. The road crosses the Red River via the southernmost of the cluster of bridges. All of the bridges were closed, according to the city of Moorhead. The bridges clearly had not seen traffic or a snowplow since the most recent snowstorm, since a strip of white covers the bridges. The bridge immediately above U.S. Highway 10 (probably a rail bridge) may be flooded. A small section of the bridge is the same dark blue color as the water.

The Red River reached a record high of 40.82 feet in this region on March 28, when this image was taken. By March 30, water levels had started to recede. Flood stage for the river is 18 feet, says the National Weather Service. A wider view of the Red River basin on March 28 shows significant flooding north and south of Fargo and Moorhead.