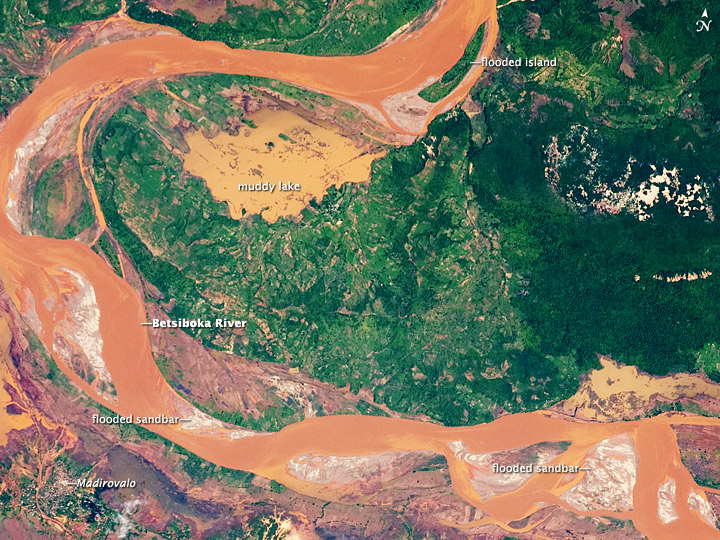 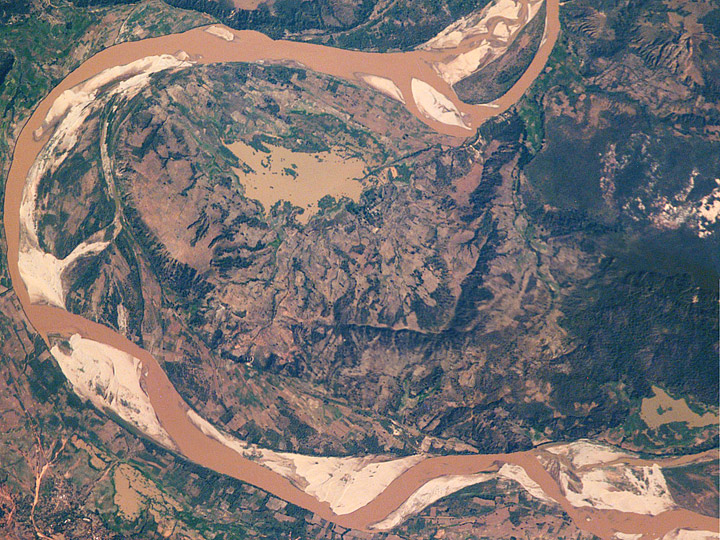 Between January 18 and 20, 2009, Tropical Storm Eric swept along the east coast of the island nation of Madagascar. Rain from this storm fell in the catchment of the Betsiboka River, one of the main rivers in northern Madagascar. In an unlikely coincidence, a larger storm, Cyclone Fanele crossed central Madagascar the next day (January 21), with its outer bands dropping more rain in the Betsiboka basin. By the time this astronaut photo was taken on January 30, the river was flooding all along its length.

The impact of the flood can be seen by comparing flood conditions (top) with normal flow conditions (bottom) along a reach of the river. The lower image is a mosaic of two astronaut images taken in late 2003. The main visual differences are the redder color of the river water, which is produced by mud from the red soils of the basin, and the greener color of the countryside in the 2009 image, which is related to summer greening of the natural forest vegetation.

The most dramatic changes are the greatly increased width of the river, flooded sand bars within the river, islands shrunken by flooding, and enlarged lakes heavily charged with red mud (indicated as a “muddy lake” on the top image). With time, flood-borne mud sinks out of lake water, and lakes become a characteristically grayer hue. Over time, the precise location of the river banks has changed, but such changes probably relate to slower, multi-year changes in the river course and not necessarily to the current flood.

Astronaut photograph ISS018-E-25705 was acquired on January 30, 2009, with a Nikon D2Xs digital camera fitted with a 400 mm lens, and is provided by the ISS Crew Earth Observations experiment and Image Science & Analysis Laboratory, Johnson Space Center. The image was taken by the Expedition 18 crew. The image in this article has been cropped and enhanced to improve contrast. Lens artifacts have been removed. The accompanying mosaic includes images ISS007-E-15208 and -15210. The International Space Station Program supports the laboratory to help astronauts take pictures of Earth that will be of the greatest value to scientists and the public, and to make those images freely available on the Internet. Additional images taken by astronauts and cosmonauts can be viewed at the NASA/JSC Gateway to Astronaut Photography of Earth. Caption by M. Justin Wilkinson, NASA-JSC.