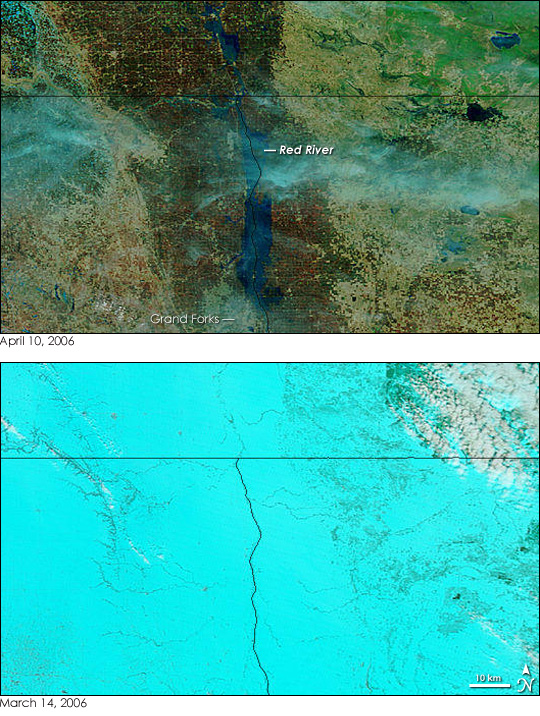 Fast-melting snow caused floods on the Red River of North Dakota and Minnesota during the first and second week of April 2006. The river was bulging with flood water when the Moderate Resolution Imaging Spectroradiometer (MODIS) on NASA’s Terra satellite captured the top image on April 10, 2006. The flood peak had passed Grand Forks, North Dakota, the cement-colored area west of the river along the lower edge of the image, and was flowing north into Canada. The next city to be inundated by the flood shown here was Winnipeg in Manitoba, Canada, beyond the north edge of the image. According to the Canadian Broadcasting Corporation, residents of Winnipeg were preparing for the floods, expected to hit the city by the third week of April.

In the top image, the Red River cuts a wide blue swath across dark red farmland. The land most likely has this hue because agricultural fires commonly scorch away stubble, leaving charcoal behind. In this false-color image, the burnt land looks red. A few wispy clouds, pale blue, drift over the flooded region. The lower image shows North Dakota, Minnesota, and Manitoba three weeks before the floods started. At that time, the river blended with the frozen, snow-covered landscape around it. The river is faintly visible in Canada, but is masked by the state boundary in the United States. To see daily images of the floods, please visit the MODIS Rapid Response Web site.

Major floods swept along the Red River of North Dakota, Minnesota, and Manitoba when spring rains and melting snow pushed the river over its banks in April 2006.