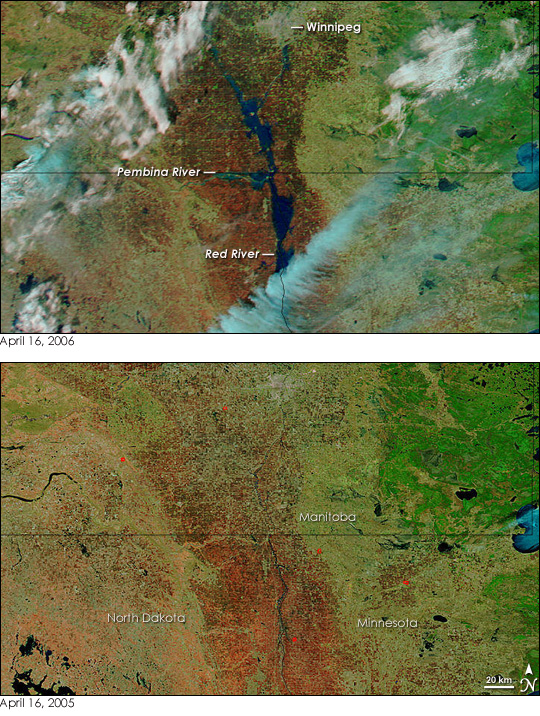 By April 16, 2006, the leading bulge of the Red River flood had made its way into Manitoba, Canada, from the river’s lower reaches in North Dakota and Minnesota. The Canadian Broadcasting Corporation (CBC) reported the river to be 15 kilometers wide in sections of southern Manitoba when the Moderate Resolution Imaging Spectroradiometer (MODIS) on NASA’s Aqua satellite took the top image on the afternoon of April 16. Heavy rain was in the forecast, the Manitoba Water Stewardship warned in a release also issued on April 16, and that means that the floods were forecast to grow on April 18.

This pair of MODIS images compares the river on April 16, 2006, to April 16, 2005. The images are shown in false color so that water is dark blue or black, clouds are pale blue and white, and bare earth ranges from red to tan. Springtime snowmelt in 2006 has driven the Red River and some of its tributaries well over their banks. Compared to the last clear view of the floods on April 13, the river leading into Winnipeg (the cement-colored region, top center) has broadened. The flood was expected to peak in the city around April 20. The Pembina River along the border between Canada and the United States is also swollen. The region near the confluence of the Pembina and Red Rivers is covered in a wide pool of water that has grown since April 13. This flood closed the border crossing between Canada and the United States when the highway was submerged, the CBC reported. Approximately 40,000 hectares of farmland were also underwater in both countries.

For more information about the floods in Canada, please visit the Manitoba Water Stewardship Website. Daily images of the floods are available from the MODIS Rapid Response Team.

Major floods swept along the Red River of North Dakota, Minnesota, and Manitoba when spring rains and melting snow pushed the river over its banks in April 2006.