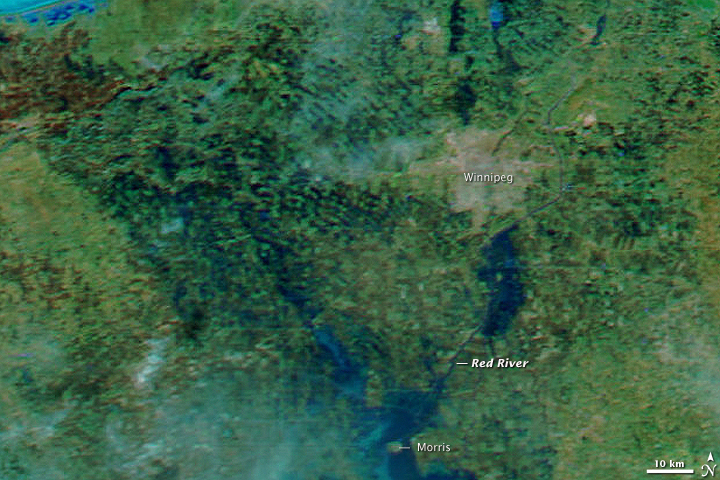 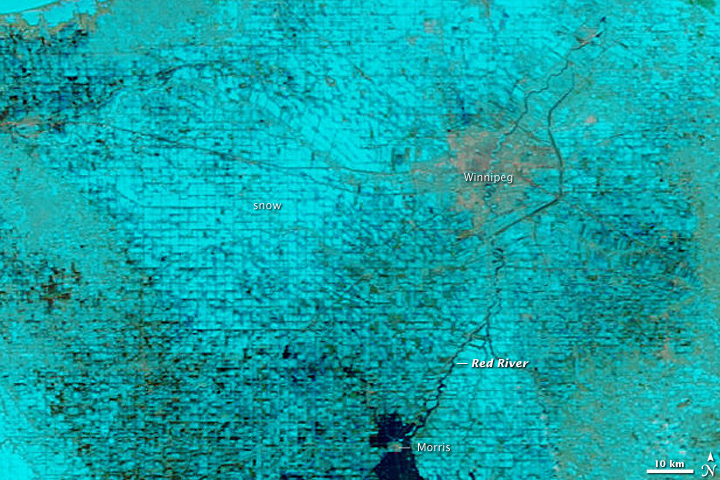 In the span of just five days, the Moderate Resolution Imaging Spectroradiometer (MODIS) on NASA’s Aqua satellite observed the Red River swell outside of Winnipeg, Manitoba, Canada. A state of emergency was declared in parts of the city on April 16, with flood waters expected to rise to near-record levels, reported the CBC News. This pair of images uses a combination of visible and infrared light to illustrate both the flood and one of its primary causes.

Aqua MODIS captured the top image on the afternoon of April 15, 2009. The lower image is from April 9. In these images, water is dark blue and snow and ice are turquoise. In just a few days, the land around Winnipeg, the cement-colored region in the upper right, thawed and the snow disappeared. Rapidly melting snow and rain swelled rivers throughout Manitoba, many of which drain into the Red River, said CBC News. Additional flooding occurred when ice blocked the north-flowing river.

The flood would be worse in Winnipeg if not for the canal that diverts water around the city. The impact of the canal is evident in the image. The Red River immediately south of Winnipeg is clearly flooded in the April 15 image. The top of the flood area, however is straight, seemingly confined and drained away by the channel flowing around the city on the east. The main channel of the Red River runs through the center of Winnipeg and is only faintly visible.

The high water that flooded Fargo, North Dakota, in late March had not yet reached Winnipeg when this image was taken. That bulge of water was still flowing north and was expected to reach Morris, a small city south of Winnipeg, around April 17, said CBC News. The town was already surrounded by water when MODIS captured the lower image on April 9, and by April 15, the flood had expanded.

Daily images of the flood region are available from the MODIS Rapid Response System.