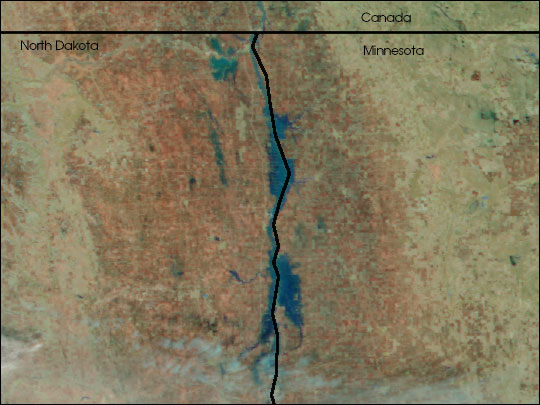 A combination of heavy rains and melting snow filled the Red River in northeastern North Dakota and western Minnesota. The Moderate Resolution Imaging Spectroradiometer (MODIS) on the Terra satellite captured this false-color image of the flooding on April 6, 2004. The blue floodwater is not confined to the land immediately surrounding the river—overland flooding is also visible. These floods occurred as the rain and melted snow puddled on top of the still-frozen ground.

On either side of the river, a grid of tiny squares marks out large agricultural fields. A flat plain initially leveled by giant ice-age glaciers, the Red River Valley often floods in the spring. This year, the flooding began the final week of March, and by April 6, when this image was taken, the waters were slowly receding. Early damage estimates say that clean-up and repair will cost $4.5 million, according to news reports.

Grand Forks, North Dakota, which has reported flood damage, is just beyond the southern edge of this image. The high resolution image shows a broader area that extends down to Fargo, North Dakota, at MODIS’ maximum resolution of 250 meters per pixel.