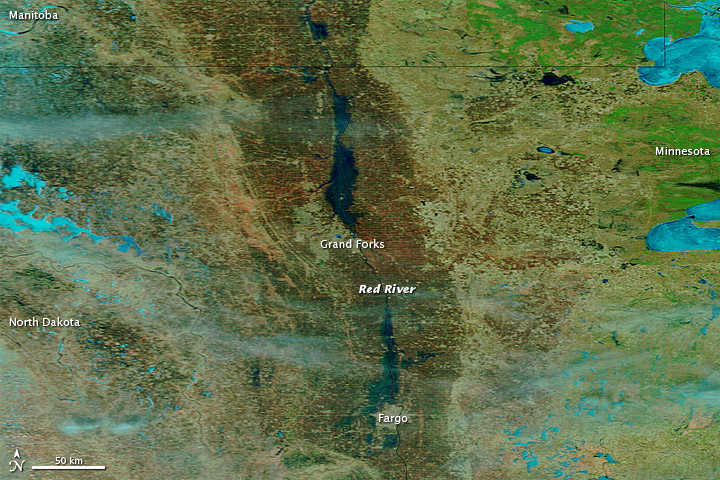 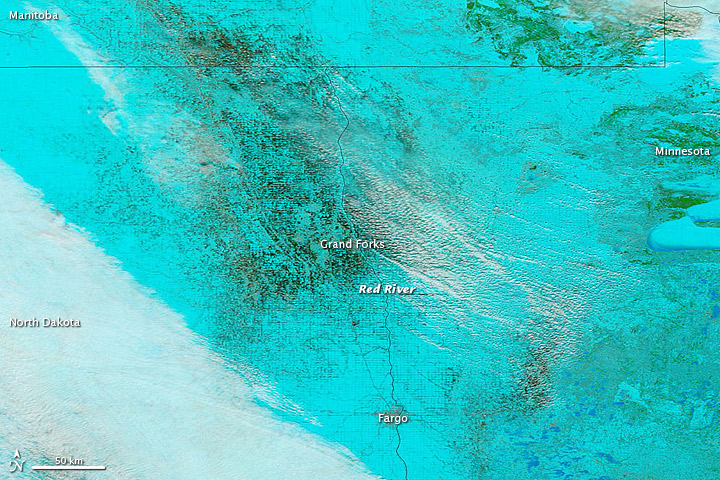 The Red River spilled over its banks along the Minnesota-North Dakota border in mid-April 2011. The river also spilled onto floodplains farther north, in Manitoba. On April 18, 2011, the Advanced Hydrological Prediction Service (AHPS) of the U.S. National Weather Service warned that flooding would continue in rural areas near the river for the next several days. The AHPS also reported that many state, county, and township roads were already closed due to high waters.

The Moderate Resolution Imaging Spectroradiometer (MODIS) on NASA’s Terra satellite acquired these images on April 14, 2011 (top), and March 18, 2011 (bottom). The images use a combination of infrared and visible light to increase the contrast between water and land. Snow and ice are bright turquoise. Water is navy. Vegetation is green. Soil is earth-toned. Clouds vary in color from pale blue-green to nearly white.

Although snow has begun to melt by mid-March, substantial snow cover remains throughout the region. The Red River appears confined to its banks along the Minnesota-North Dakota border and into Canada. A month later, after snows have melted, flooding is evident along the Red River. Standing water appears along the western margin of Fargo. The Red River is flooded between Fargo and Grand Forks, and more flooding appears north of Grand Forks into Canada. North of Grand Forks, water apparently spans as much as 20 kilometers (roughly 10 miles) in some places.

On April 15, 2011, Reuters reported that flooded conditions in the region were complicated by fresh snow and freezing temperatures.