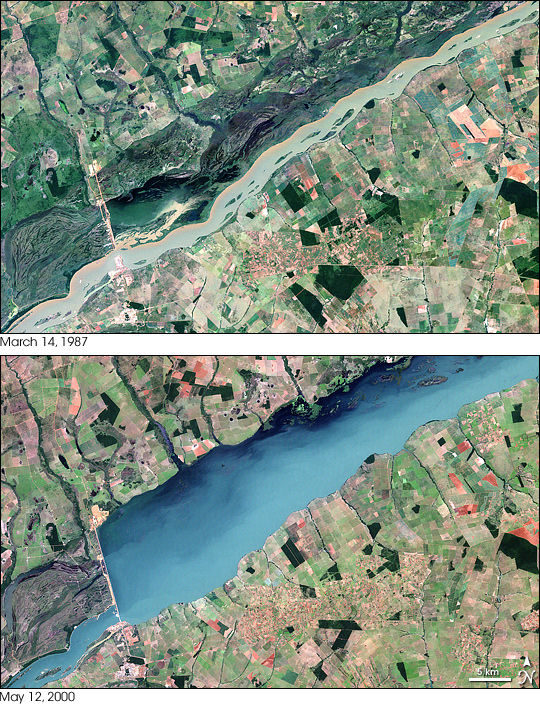 Brazil’s Porto Primavera Dam sits on the Paraná River, 28 kilometers (17 miles) upstream from the confluence of the Paranapanema and Paraná Rivers. Constructed to provide hydroelectricity, this dam created the Porto Primavera Reservoir, which was filled in two stages in December 1998 and March 2001.

NASA’s Landsat satellite captured these images before and after the dam began filling Porto Primavera Reservoir. Landsat 5 acquired the top image on March 14, 1987, and Landsat 7 acquired the bottom image on May 12, 2000. The top image shows the Paraná River flowing unimpeded through the incomplete dam, which cuts partway across the river from the north. In this image, the relatively shallow river allows numerous islets to poke above the water’s surface. The bottom image shows the reservoir created by the dam. In this image, the reservoir covers a much wider area, and many of the islets that had been visible in the top image no longer appear.

Any reservoir substantially alters the river on which it is built, changing the water flow, the occurrence and frequency of flooding, the amount of nutrients delivered to seasonally flooded areas, even the temperature conditions downstream of the dam. In 2006, a study of the effects of the Porto Primavera Dam indicated that it had affected fish reproduction downstream.

Porto Primavera Reservoir also experienced an infestation of aquatic weeds. In 2005, a team of scientists from Brazil and the U.S. Department of Agriculture’s Agricultural Research Service discovered an infestation of Hydrilla verticillata in 2005. Lars Anderson, who led the study, described this species as one of the world’s worst aquatic weeds. It can interfere with hydropower production and the storage and delivery of irrigation and drinking water. Native to warmer parts of Asia, the weed was first discovered in the United States in 1960. The discovery of this weed in Porto Primavera marked the plant’s first known occurrence in Brazil and possibly all of South America, according to Anderson. He and his collaborators planned to propose a management plan for the weed following more detailed surveys to measure the infestation’s extent.

You can download a 30-meter-resolution KMZ file of the reservoir, and its appearance before the completion of the dam, suitable for use with Google Earth.