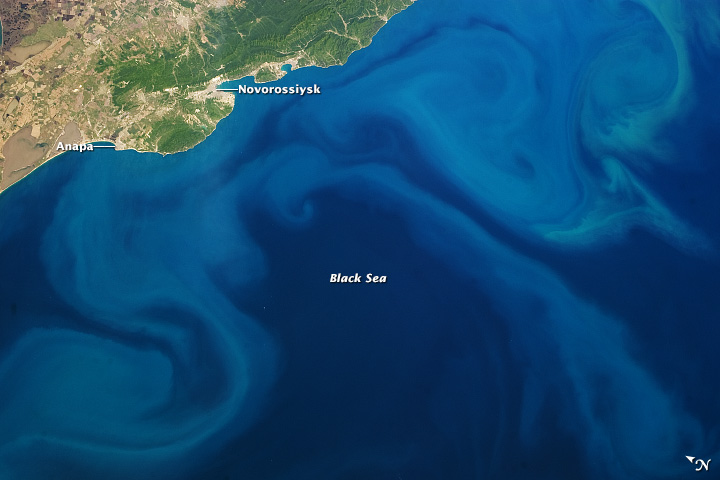 The Black Sea, a large inland water body that connects eastern Europe and Asia Minor, frequently hosts widespread blooms of phytoplankton during the spring and summer seasons. This astronaut photograph, taken from the International Space Station, highlights a recent bloom in the Black Sea’s eastern half.

The phytoplankton are visible as blue to turquoise streams and swirls, carried by currents along the coastline and further out towards the middle of the sea. The urban areas of Anapa and Novorossiysk—the largest Russian seaport on the Black Sea—are visible along the northern shoreline as grey-white regions nestled between the sea and uplands dotted with limestone quarries. (Note that north is to the upper left in this image.)

Phytoplankton occupy the base of most aquatic food chains and therefore serve as the primary producers in these ecosystems, despite being microscopic in size. The term “phytoplankton” includes a number of organisms—cyanobacteria, diatoms, dinoflagellates, algae, and coccolithophores—that feed larger creatures such as fish and shrimp.

The Black Sea receives contributions of freshwater from several river systems, including the Danube, Dnieper, Dniester, and Don, but it is also connected to the saline Mediterranean and Marmara Seas. These same river systems transport nutrient-filled urban and agricultural runoff to the Black Sea; the nutrients are consumed by phytoplankton and lead to blooms.

Astronaut photograph ISS035-E-40035 was acquired on May 9, 2013, with a Nikon D3S digital camera using a 50 millimeter lens, and is provided by the ISS Crew Earth Observations experiment and Image Science & Analysis Laboratory, Johnson Space Center. The image was taken by the Expedition 35 crew. It has been cropped and enhanced to improve contrast, and lens artifacts have been removed. The International Space Station Program supports the laboratory as part of the ISS National Lab to help astronauts take pictures of Earth that will be of the greatest value to scientists and the public, and to make those images freely available on the Internet. Additional images taken by astronauts and cosmonauts can be viewed at the NASA/JSC Gateway to Astronaut Photography of Earth. Caption by William L. Stefanov, Jacobs/JETS at NASA-JSC. 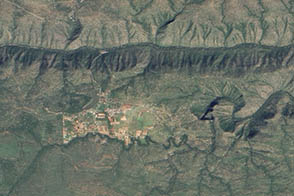 This image shows a colorful bloom of phytoplankton in the Black Sea on June 4, 2008, along the southern coast near the Turkish cities of Sinop and Samsun. The natural-color image was captured by the Moderate Resolution Imaging Spectroradiometer (MODIS) on NASA’s Aqua satellite. Loops and swirls of blooming phytoplankton follow the coastline, while farther out in the open waters (upper right), the blooms become more spread out. The greenish plumes hugging the coast from Sinop westward to just beyond Samsun may be river plumes. River plumes can contain nutrients that stimulate phytoplankton blooms, but they may also contain sediment and organic matter that can color the water.