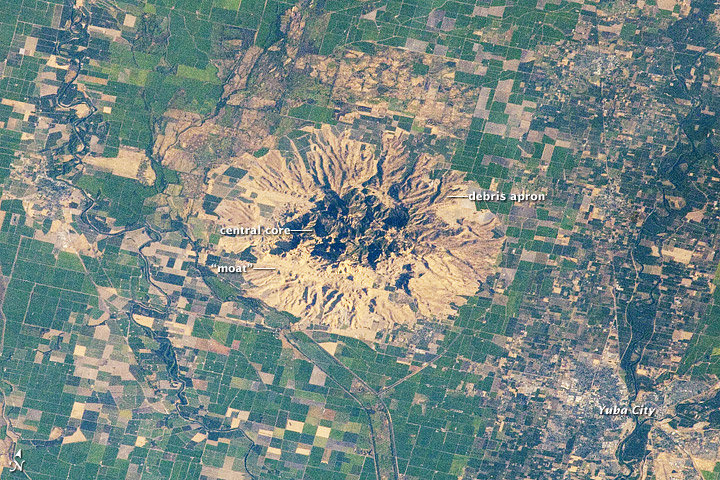 Sometimes called the “smallest mountain range in the world,” the Sutter Buttes rise almost 610 meters (2,000 feet) above the flat agricultural fields of the Great Valley of central California. The Sutter Buttes are remnants of a volcano that was active approximately 1.6 to 1.4 million years ago during the Pleistocene Epoch. The central core of the Buttes is characterized by lava domes—piles of viscous lava that erupted onto the surface and were built higher with each successive layer. Today, these lava domes form the high central hills of the Buttes; shadows cast by the hills are visible at image center.

Surrounding the core is an apron of fragmental material created by occasional eruptions of the lava domes. This apron extends roughly 18 kilometers east-to-west and 16 kilometers north-to-south (11 by 10 miles). The volcanic material was transported outwards from the central core by volcanic gas-driven pyroclastic flows or by cooler, water-driven lahars. Later stream erosion of the debris apron is evident from the drainage pattern surrounding the central core. A third geomorphic region of valleys, known as the “moat,” lies between the core and the debris apron, and was formed by erosion of older, exposed sedimentary rocks that underlie the volcanic rocks.

The Sutter Buttes present a striking visual contrast with the surrounding agricultural fields—mostly rice, with some sunflower, winter wheat, tomato, and almonds—of the Great Valley. Urban areas such as Yuba City, California (located 18 kilometers/11 miles to the southeast) appear as light to dark gray stippled regions. Sacramento, California, (not shown) is located approximately 80 kilometers (50 miles) to the south-southeast. The image appears slightly distorted (oblique) due to the viewing angle from the International Space Station.

A more detailed description of the geology of the Sutter Buttes is available here (PDF).

Astronaut photograph ISS032-E-10482 was acquired on July 29, 2012, with a Nikon D2Xs digital camera using a 180 mm lens, and is provided by the ISS Crew Earth Observations experiment and Image Science & Analysis Laboratory, Johnson Space Center. The image was taken by the Expedition 32 crew. It has been cropped and enhanced to improve contrast, and lens artifacts have been removed. The International Space Station Program supports the laboratory as part of the ISS National Lab to help astronauts take pictures of Earth that will be of the greatest value to scientists and the public, and to make those images freely available on the Internet. Additional images taken by astronauts and cosmonauts can be viewed at the NASA/JSC Gateway to Astronaut Photography of Earth. Caption by William L. Stefanov, Jacobs/ESCG at NASA-JSC.