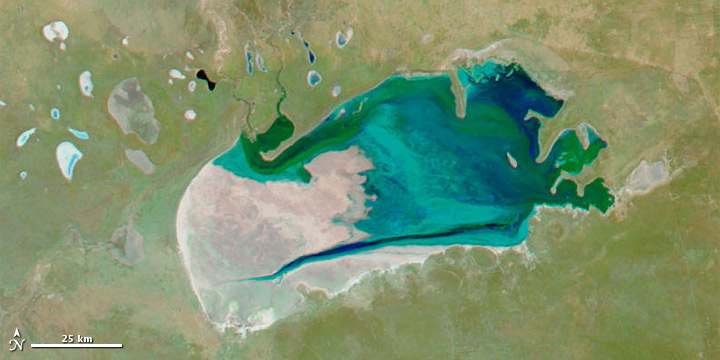 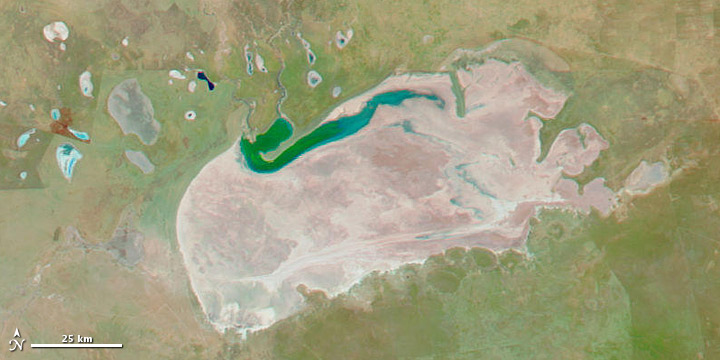 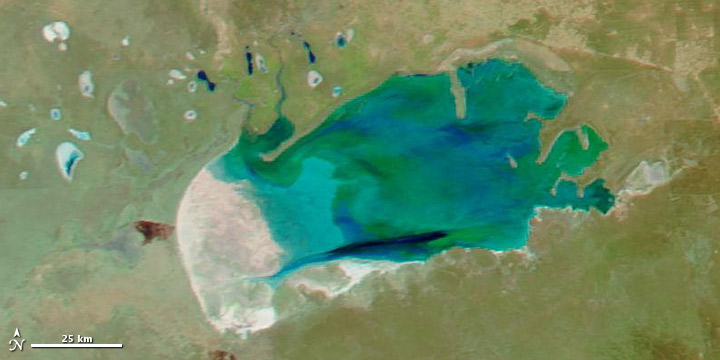 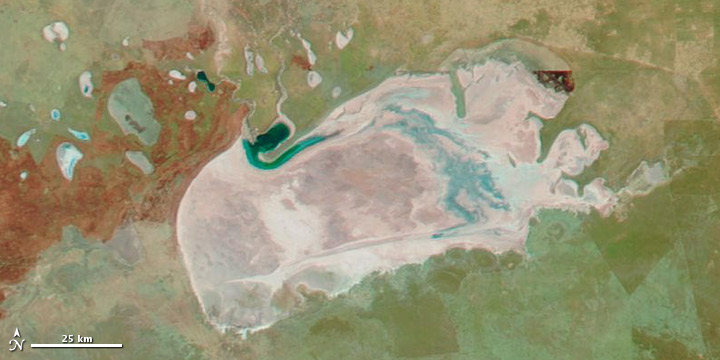 Outside of the Sahara, the driest country in Africa is Namibia. Although flooding is familiar in the country’s far eastern Caprivi Strip, most of Namibia is vulnerable to prolonged drought. On average, the country receives just 258 millimeters (10 inches) of rain per year, though annual rainfall amounts can vary considerably.

One place that gives an indication of Namibia’s precipitation is Etosha Pan. The Moderate Resolution Imaging Spectroradiometer (MODIS) on NASA’s Aqua satellite captured these images on July 30, 2009; July 31, 2010; July 31, 2011; and July 31, 2012. All of the images use a combination of infrared and visible light to increase the contrast between water and land. Water varies in color from electric blue to navy, with darker shades indicating deeper water. Vegetation, even sparse vegetation, appears green. Burnt orange indicates burn scars from fires.

Today, Etosha is a saltpan, but between 2 and 10 million years ago, it was a lake fed by the Kunene (Cunene) River. Changes in land surface features re-routed the Kunene, causing it to flow directly into the Atlantic Ocean. The water gradually evaporated, and the lake hasn’t reached anything like its old capacity since. Still, generous rains can sometimes leave Etosha Pan partially filled.

Etosha Pan has two basic seasons: wet and dry. The rainy season may begin as early as November and last as late as May. In the months that follow, the lake gradually dries up. Spring begins in September. Temperatures rise and water holes shrink.

The year-to-year contrast between these images is striking. Water sprawls over most of the pan in 2009 and 2011, but only minimal amounts appear in 2010 and 2012. Water levels generally drop through July, but how much water is left in and around the pan depends on how generous rains were in the preceding wet season. The years 2009 through 2012 showed a mix of unusually wet and unusually dry conditions, including flooding in 2011.

Even by Namibia’s normally arid standards, the Etosha region was parched in July 2012, and the Namibian government pledged aid to drought-stricken regions. According to the U.S. Foreign Agricultural Service, below-normal precipitation plagued this region from early April to late June. By mid-July 2012, most of the country had not seen rain for more than 25 days.