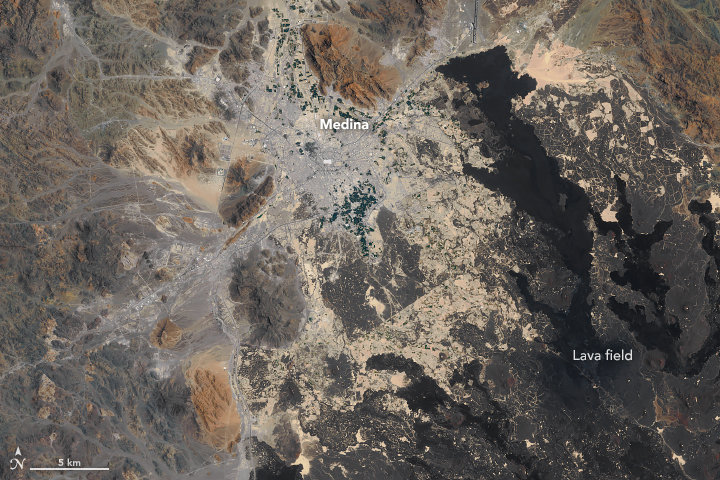 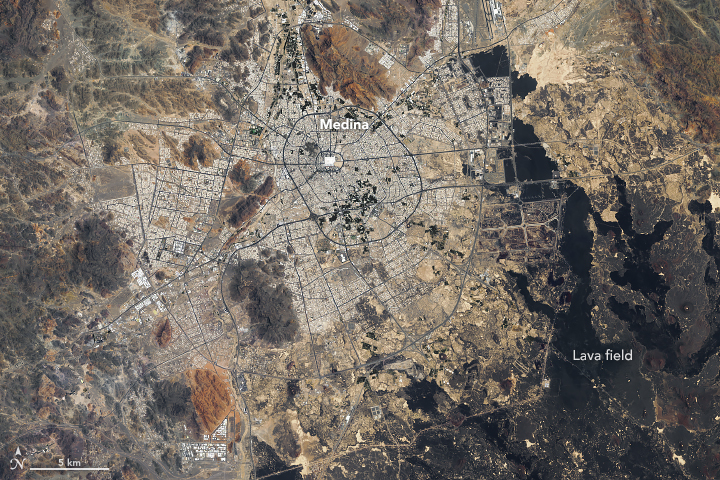 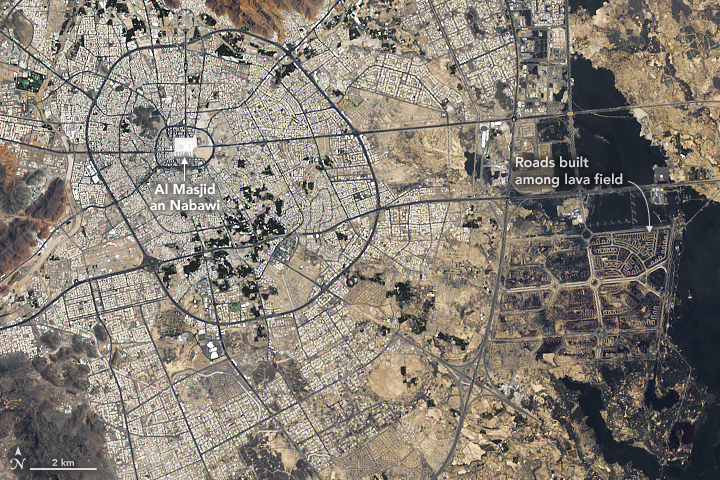 Medina, the fourth largest city in Saudi Arabia and one of the holiest cities in Islam, is far from the only human settlement built on or very near a volcano. Auckland, the largest city in New Zealand, sits on land scattered with small, now-dormant volcanoes. Hilo, Hawaii, is built entirely on old volcanic lava flows. There’s even a town in Japan called Aogashima that is situated squarely within the caldera of an active volcano.

But the lack of vegetation on the arid landscape of western Saudi Arabia make the mingling of lava flows and modern civilization around Medina as stark as anywhere in the world. On June 22, 1984, the Thematic Mapper on Landsat 5 acquired the top image. More than three decades later, on July 22, 2018, the Operational Land Image (OLI) on Landsat 8 acquired the second image.

Over that span, the fast-expanding city spread across parts of a lava flow that extends from a fissure about 20 kilometers (12 miles) south of the city into Medina’s eastern suburbs. A new university, hospital complex, residential neighborhoods, and roads have transformed the dark, basalt of the lava flow into one that appears brighter and more varied.

While building on basalt is common, some of its properties require that architects and engineers do a bit of extra due diligence. "The issue with basalt or any geologically young lava flow is that the material can be very strong and dense, but its properties will vary greatly within the same lava field," explained Pedro Sifre, a structural engineer with the firm Simpson Gumpertz & Heger. "Some of the basalt will be very porous because of large quantities of gases or steam that erupted with the magma and left behind many voids. Some of the basalt may be striated; some has a lumpy consistency—like Rice Krispie treats." Engineers prefer to build on metamorphic rocks, like schist, that have been compressed under such high pressures that the rock becomes quite dense and uniform.

The flow that reaches farthest into the city formed in 1256 A.D., when some 500 million cubic meters of lava poured from six vents in the northernmost part of the volcanic field. It is Harrat Rahat’s youngest lava flow and the youngest flow in Saudi Arabia; an earlier eruption in 641 A.D. created the finger-like flows to the east of the 1256 A.D. flow.

While the vents near Medina have been dormant for centuries, Harrat Rahat could eventually become active again. When a team of geologists analyzed the likelihood of the city being affected by a new eruption, they concluded that a quarter of Medina faced a small probability (less than 0.1 percent) of lava inundation. They estimated that the volcano produces roughly one new vent every 3,300 years.

While the 1256 A.D. eruption was slow-moving and not explosive—much like the lava flows from Kilauea that crept into neighborhoods in Hawaii in 2018—an analysis of the Al-Du’aythah volcanic cones west of the city’s center show that some vents on Harrat Rahat hurled hunks of lava called bombs and smaller projectiles known as lapilli through the air during the 641 A.D. eruption

“This is an active volcanic field and a new eruption could emerge at any time, so it is important to be prepared," said Hugo Murcia, a Caldas University volcanologist. “We found evidence that there is enough water in confined aquifers to potentially trigger very explosive eruptions.” 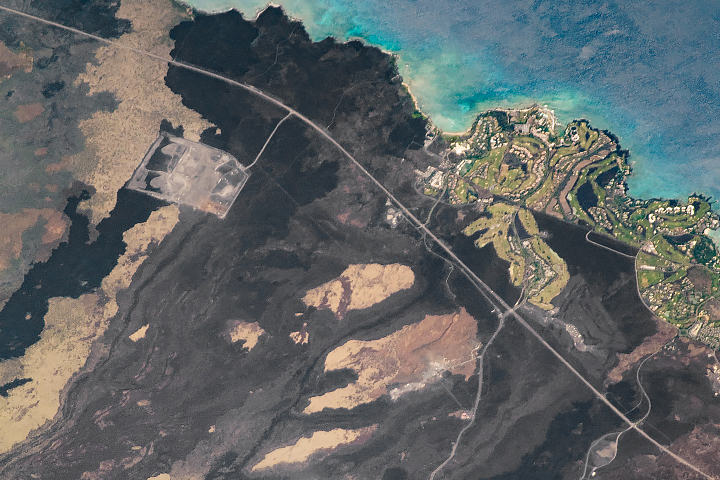