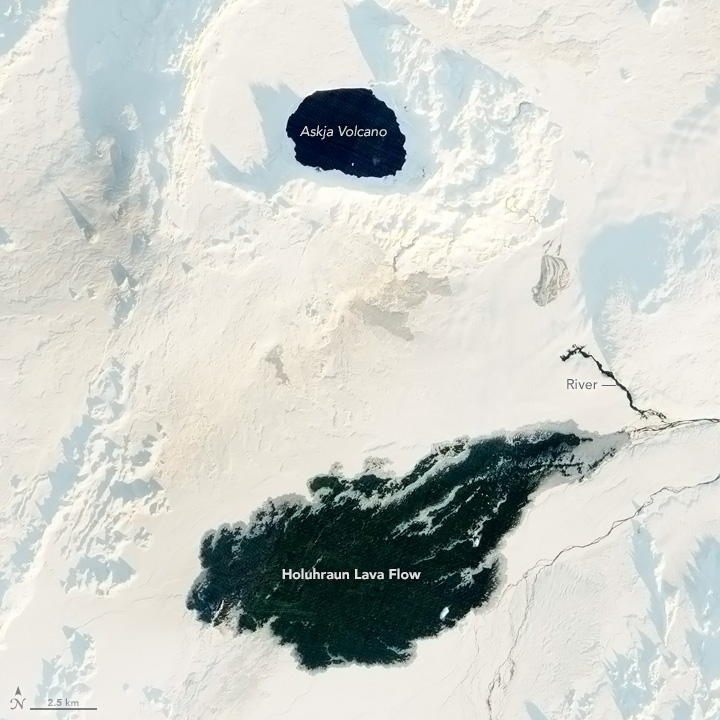 More than a year after the latest eruption at Iceland’s Holuhraun lava field, the newly-formed lava may still be toasty underneath. Although the basaltic rock formed a hard crust, according to volcanologists, the flow is probably still hot enough to prevent snow from building up atop it.

“You’re not going to freeze the lava flow,” said Erik Klemetti, a volcanologist at Denison University and author of the Eruptions blog at Wired magazine. “You need to wait for the soil to freeze to get snow to accumulate in temperate latitudes.”

The 2014–15 eruption was a big one—Iceland’s largest basaltic lava flow since the Laki eruption of 1783–84, which killed more than 20 percent of the population. In February 2015, Icelandic scientists declared the recent eruption over; lava had spread across 84 square kilometers (32 square miles), an area slightly larger than the island of Manhattan. Using surveillance flight data, scientists from the University of Iceland’s Institute of Earth Sciences estimated the lava’s thickness at an average of 10 meters to 14 meters (33 to 46 feet).

The sheer mass of lava could mean the flow still retains heat at a depth of a couple of meters, Klemetti said. “There’s some amount of steam—little bits of vapor that can come off, keep [the flow] ambiently warmer,” he said. Additionally, the lava flow is jagged—far rougher than the surrounding rock, and not a surface that encourages snow buildup. Plus, the rock is black and unvegetated, Klemetti noted, which means it absorbs more heat from the Sun than the area around it.

Holuhraun’s 2015 flow appears dark against the Icelandic snowscape. This image was captured by the Advanced Land Imager on NASA’s Earth Observing-1 satellite at 10:00 a.m. local time. The photo has been edited to correct for the low angle of the Sun, which caused the white snow to appear reddish. Snow does appear to build up along the edges of the lava flow, where the lava is thinner. 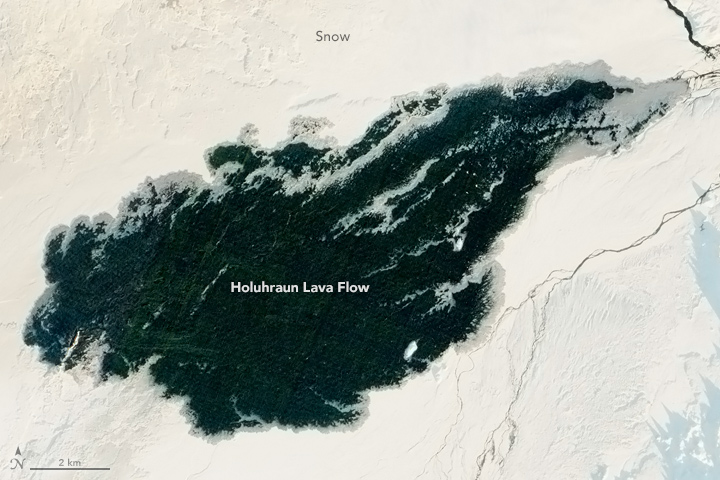