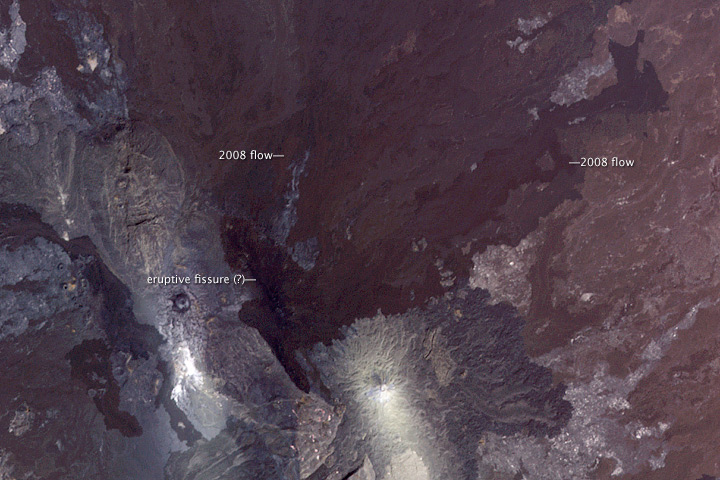 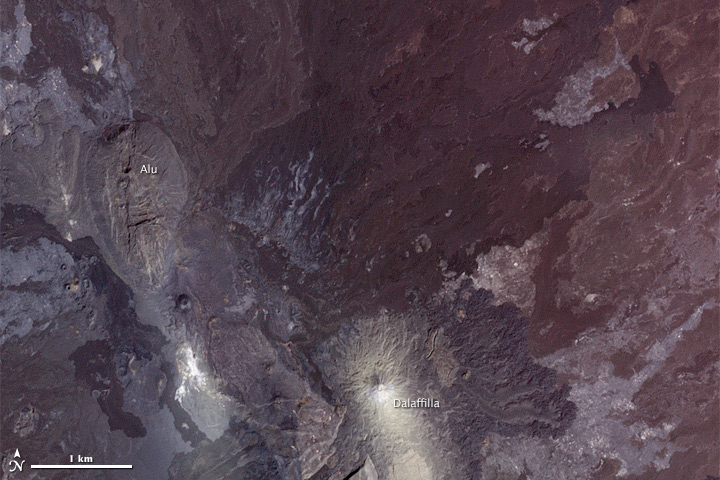 In Ethiopia’s Afar region—where three tectonic plates wrench themselves apart deep underground—molten rock often bubbles up to the surface, sustaining a network of volcanoes and volcanic fissures. On November 5, 2008, reports emerged about new volcanic activity in this region, including a fresh lava flow.

The Advanced Spaceborne Thermal Emission and Reflection Radiometer (ASTER) on NASA’s Terra satellite captured images before and after the eruption. The bottom image shows the area on February 5, 2006. The top image shows the same area on November 16, 2008, less than two weeks after the reported lava flow. These images are made from a combination of visible and near-infrared light. In both images, the Dalaffilla summit appears ghostly white, thanks to a rock composition that differs from those in the surrounding area. Old lava flows appear in varying shades of purple-brown. The fresh lava flow produced in early 2008 appears much darker than most of the rest of the landscape.

Due to the remote location and abundance of volcanoes, the exact source of the new lava flow is not immediately obvious from satellite images. The lava erupted from somewhere in the Erta Ale Range, a volcanic field that derives its name from the Erta Ale Volcano. Other active volcanoes in the region include Dalaffilla and Alu. The lava appears to have erupted from fissures between these volcanoes. Hotspots of volcanic activity lingered in this region in mid-November 2008.

Dalaffilla Volcano is a stratovolcano composed of alternating layers of hardened lava, solidified ash, and rocks ejected by previous eruptions. It is a relatively small volcano, but its steep slopes rise some 300 meters (985 feet) above the surrounding lava field. Alu is a linear fissure vent through which lava can erupt.