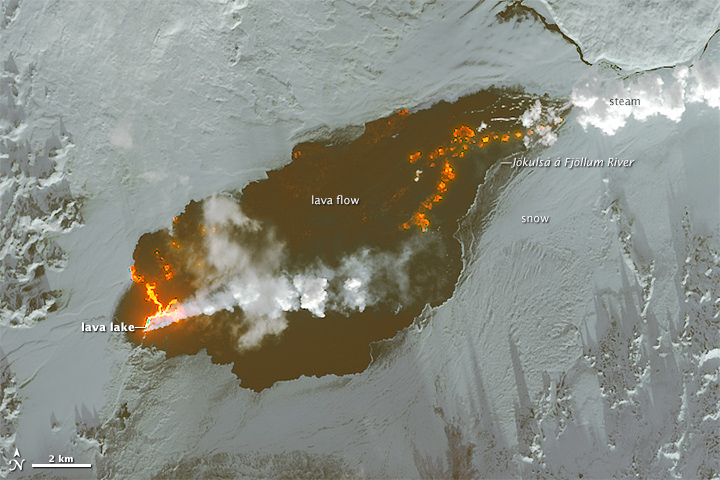 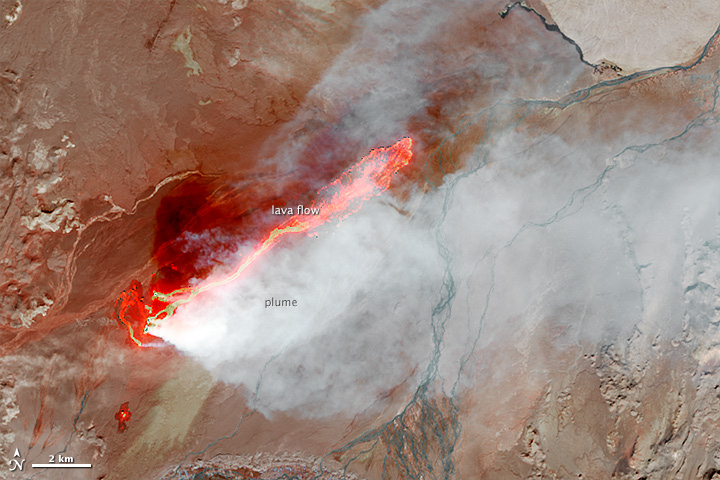 Since August 2014, lava has gushed from fissures just north of Vatnajökull, Iceland’s largest glacier. As of January 6, 2015, the Holuhraun lava field had spread across more than 84 square kilometers (32 square miles), making it larger than the island of Manhattan. Holuhraun is Iceland’s largest basaltic lava flow since the Laki eruption in 1783–84, an event that killed 20 percent of the island’s population.

The Operational Land Imager (OLI) on Landsat 8 captured this view of the lava field on January 3, 2015. The false-color images combine shortwave infrared, near infrared, and red light (OLI bands 6-5-4). The plume of steam and sulfur dioxide appears white. Newly-formed basaltic rock is black. Fresh lava is bright orange. A lava lake is visible on the western part of the lava field, and steam rises from the eastern margin where the lava meets the Jökulsá á Fjöllum river.

Scientists from the University of Iceland’s Institute of Earth Sciences have estimated the thickness of the lava field based on data from surveillance flights. On average, the eastern part was about 10 meters (33 feet) thick, the center was 12 meters, and the western part was 14 meters. Their preliminary analysis put the volume of lava at 1.1 cubic kilometers, enough for the eruption to be considered a flood basalt.

While Holuhraun continues to spew copious amounts of lava and sulfur dioxide, some observations suggest the eruption may be slowing down. As Edinburgh University volcanologist John Stevenson noted on his blog, Icelandic scientists have shown that the sinking (subsidence) of the caldera has declined from 80 centimeters (31 inches) to 25 centimeters per day—a sign that less magma is moving toward the surface. In addition, magnitude 5 or higher earthquakes that used to occur daily are now happening about once a week. Meanwhile, satellite observations of heat flux show a decline from more than 20 gigawatts in early September to fewer than 5 gigawatts by the end of November.

“This doesn’t mean that the eruption will stop soon. Like the weakening spray from an aerosol can, the eruption rate declines exponentially. The lower the flow, the more slowly it declines,” said Stevenson. Some volcanologists have predicted lava could continue to flow for years.

The video below, shot by Stevenson, shows a University of Iceland scientist sampling an active lava flow. Orange-yellow material has a temperature of about 800 degrees Celsius (1,470 degrees Fahrenheit), but there is no danger that the steel in the shovel will melt because it has a melting point of about 1,400 degrees Celsius and steel is a poor conductor of heat. After collection, the sample was dropped into a large metal saucepan and quenched by pouring water into it. Analysis of these samples has confirmed that the magma originated in the Bardarbunga volcanic system and was last stored at a depth of 9 to 20 kilometers beneath the surface.

NASA Earth Observatory images by Jesse Allen and Josh Stevens, using Landsat data from the U.S. Geological Survey. Caption by Adam Voiland, with information and fact checking by Anja Schmidt (University of Leeds) and John Stevenson (The University of Edinburgh).