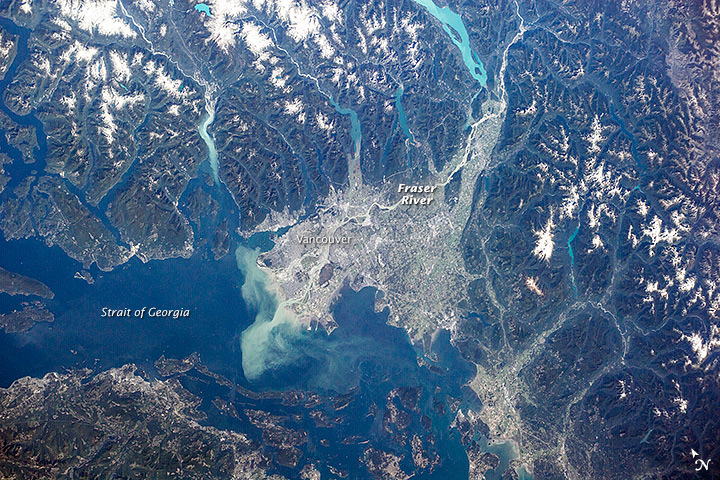 In British Columbia, the Fraser River winds for almost 1,400 kilometers (870 miles), making it the longest river in this Canadian province. Snowmelt feeds the river, which flows alongside the Rocky Mountains to a relatively flat plateau. The Fraser continues down through the Coast Mountains and the Fraser Canyon until reaching a 130-kilometer-wide (81-mile-wide) floodplain that empties into the Strait of Georgia.

Along its journey, the river picks up and carries a huge load of silt—about 20 million tons each year. Most of it flows into the Strait of Georgia, while about 3.5 million tons is left behind and deposited in the lower river valley. The silt gives the river a milky color; this effect is most pronounced at the river's mouth, where the freshwater plume is visible even from space.

Those silty sediments do not travel alone. They carry nutrients that support phytoplankton growth into the strait and the ocean. (Blooms of phytoplankton can also impart a blue, green, or milky color to the water.) These blooms become the center of a food web for grazers like the sockeye salmon that hatch in the Fraser. Those nutrients are recycled back to the Fraser when the salmon return four years later to spawn.

The photograph above was taken on September 6, 2014, by an astronaut on the International Space Station. According to news reports, September 2014 saw the return of as many as 23 million salmon to the Fraser River.

Astronaut photograph ISS040-E-138806 was acquired on September 6, 2014, with a Nikon D3S digital camera using a 86 millimeter lens, and is provided by the ISS Crew Earth Observations Facility and the Earth Science and Remote Sensing Unit, Johnson Space Center. The image was taken by the Expedition 40 crew. It has been cropped and enhanced to improve contrast, and lens artifacts have been removed. The International Space Station Program supports the laboratory as part of the ISS National Lab to help astronauts take pictures of Earth that will be of the greatest value to scientists and the public, and to make those images freely available on the Internet. Additional images taken by astronauts and cosmonauts can be viewed at the NASA/JSC Gateway to Astronaut Photography of Earth. Caption by Kathryn Hansen.