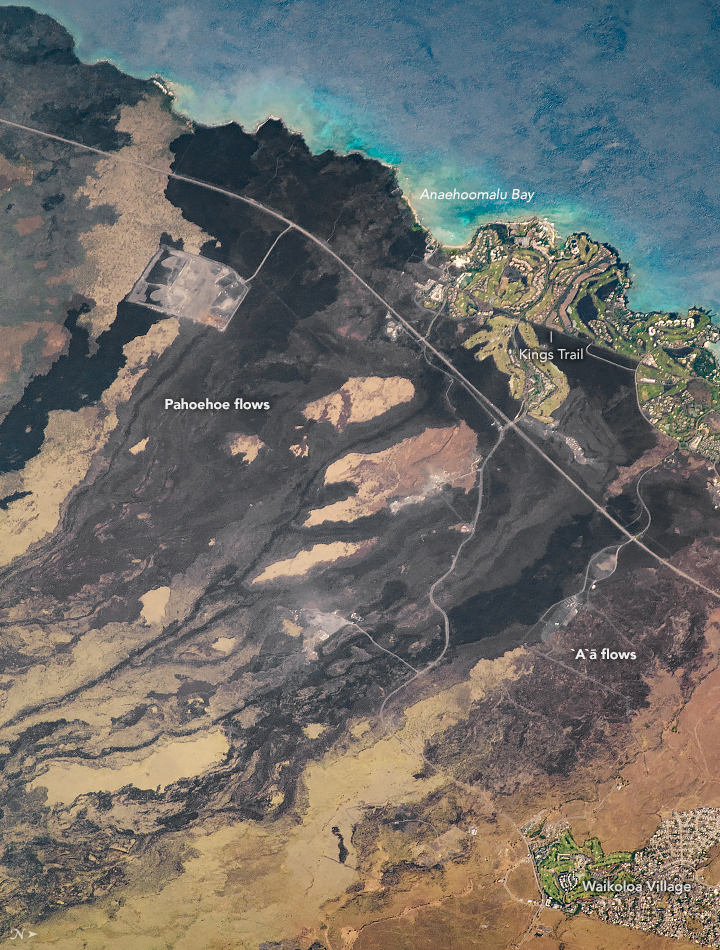 An astronaut aboard the International Space Station shot this photograph of historical lava flows on the island of Hawai’i. Several villages in the area are underlain by lavas erupted from radial vents on the northwestern side of Mauna Loa volcano.

The island of Hawai’i is divided into nine hazard risk zones, each based on the proximity to volcanic summits and rift zones, frequency and area of lava coverage, and topography. Zone 1 represents the greatest hazard risk, but Waikoloa stands in a less hazardous zone 3 due to the greater distances from the summit and rift zones of Mauna Loa.

The region near Waikoloa is known for its thriving aquaculture, particularly at the Anchialine Ponds. Native to the state of Hawaii, these natural ponds form in inland lava depressions and connect to the groundwater table near the shore. They contain brackish water but no visible connection to the ocean. These pools range from small lava cracks to large fishing ponds and are home to multiple species of rare invertebrates, many of which are endemic to the Hawaiian Islands.

This area is also home to the Ala Mamalahoa (King’s Trail), part of the 175-mile long Ala Kahakai National Historic Trail that runs along the coastline of Hawai’i. The Ala Mahamaloa predates western contact with the island (1778), but it was rebuilt and paved with stone in 1840. One of the main attractions is the collection of ancient petroglyphs, which show the closest thing to a written language that the ancient Hawaiians used.

Astronaut photograph ISS056-E-5107 was acquired on June 4, 2018, with a Nikon D5 digital camera using a 1600 millimeter lens and is provided by the ISS Crew Earth Observations Facility and the Earth Science and Remote Sensing Unit, Johnson Space Center. The image was taken by a member of the Expedition 56 crew. The image has been cropped and enhanced to improve contrast, and lens artifacts have been removed. The International Space Station Program supports the laboratory as part of the ISS National Lab to help astronauts take pictures of Earth that will be of the greatest value to scientists and the public, and to make those images freely available on the Internet. Additional images taken by astronauts and cosmonauts can be viewed at the NASA/JSC Gateway to Astronaut Photography of Earth. Caption by Sarah Deitrick, Jacobs, JETS Contract at NASA-JSC.