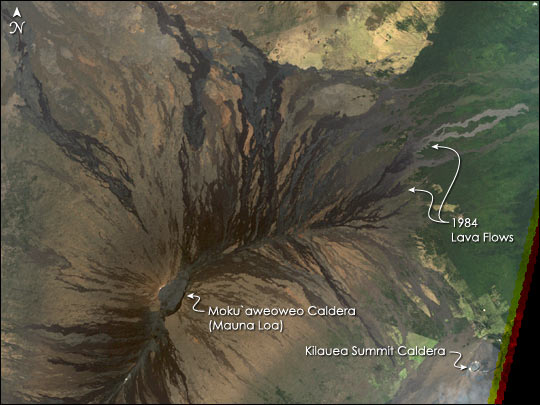 Far out in the central Pacific Ocean, thousands of miles from any large landmass, hot molten rock from deep in the Earth’s core bubbles up and periodically recreates the largest volcano in the world: Mauna Loa on the “Big Island” of Hawai‘i. Most of the surface of the volcano is covered by lava flows that have been laid down in the last 10,000 years, although geologists believe the volcano is probably between 600,000 and 1 million years old.

In this Landsat image from February 5, 2000, the rivers of hardened lava make dark brown etchings across the massive volcano’s flanks. The peak reaches up 9 kilometers from the ocean floor, extending to an altitude of 4,170 meters (13,681 feet). On the northeast and southwest sides of the Moku’aweoweo caldera at the summit are two rift zones, from which fountains of lava periodically erupt. The trails of lava from the last eruption of Mauna Loa, in 1984, snake down from the northeast rift zone into the green vegetation of the lower slopes. At bottom right of the image is Kilauea Volcano, whose spectacular lava flows spill, sizzling, into the ocean. Both volcanos are part of Hawai‘i’s Volcanos National Park.

Some researchers have proposed that throughout its history, Mauna Loa has operated on a 2,000-year cycle in which eruptive activity shifts from the rift zones to the caldera and back to the rift zones. If this proves to be true, then the volcano should be about to shift away from its recent history of rift zone lava flows and back to eruptions from the lava-lake in the volcano’s caldera. Current reports from the Hawai‘ian Volcano Observatory say that according to Global Positioning System measurements, the distance between two monitoring stations on the north and south side of the caldera is increasing, an indication that the magma reservoir within the volcano is growing.

Image by Robert Simmon, based on Landsat 7 data archived by the Global Land Cover Facility