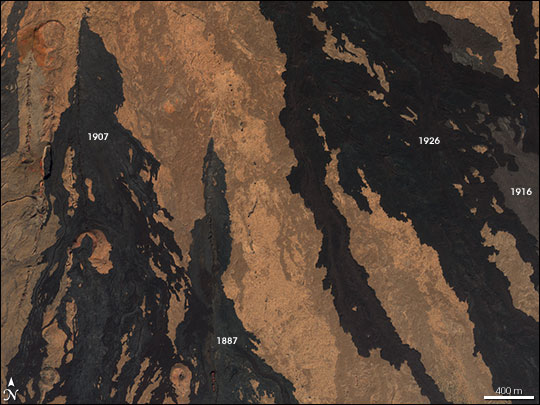 Mauna Loa is the largest of the five volcanoes that comprise the island of Hawai‘i. Although it doesn’t erupt as frequently as its little sister, Kilauea, Mauna Loa’s eruptions are large and spectacular. Curtains of lava fountains can extend for kilometers down the flanks of the volcano, and rivers of lava flow from high up the mountain slopes to the ocean. Eruptions usually begin in the summit caldera [4,169 meters (13,677 feet)] and then migrate down one of the volcano’s two rift zones. The rift zones are chains of craters and fissures that extend from Mauna Loa’s summit to the sea.

This image, acquired by DigitalGlobe’s IKONOS satellite, shows a small portion of the Southwest Rift, just north of the Hawai‘ian Ocean View Estates (HOVE) housing development. Lava flows from four historical eruptions cross the image, sometimes overlaying one another. From left to right: 1907 (which covered a total of 28 km2), 1887 (29 km2), 1926 (35 km2), and 1916 (17 km2). On the dry, leeward side of Hawai‘i, lava weathers very slowly, appearing almost fresh for hundreds of years after an eruption. More recent flows tend to be darker than older flows. Prehistoric flows are visible underneath the modern flows, but are still fresh enough to be completely free of vegetation. Vertical chains of volcanic vents and a few larger craters appear in the left-hand side of the image.

Mauna Loa last erupted in 1984, and had been quiet until recently. A series of mild earthquakes (averaging more than 200 a month) centered 35-50 km beneath the summit began in July 2004. The summit caldera has also begun to inflate, or swell. Volcanologists believe these data indicate magma rising into the volcano from deep beneath the Earth. Since Mauna Loa erupts roughly once every five years, the recent activity may be the precursor to a new eruption.