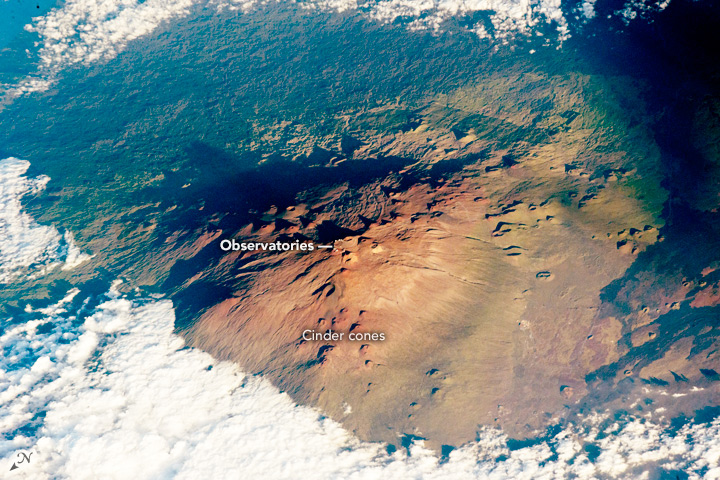 Mauna Kea (“White Mountain”) is the only volcano on the island of Hawaii that has evidence of glaciation. This photograph of Mauna Kea was taken by an astronaut as the International Space Station (ISS) passed over at approximately 5 p.m. local time. The late-afternoon lighting and oblique viewing angle accentuates the shadows, highlighting the white domes of the observatories along the crater rims. The angle also accentuates the numerous cinder cones and lava flows. Astronauts are often deprived of a three-dimensional sense of mountains because the ISS flies so far above Earth’s surface. But the low Sun angle here gives a strong sense of the domed shape of this immense volcano.

Several observatories appear as small white dots on the rim of Mauna Kea. As the highest volcano on the island of Hawaii (summit elevation 4,205 meters or 13,800 feet above sea level), it is an ideal location for the astronomical observatories set up by several countries and academic consortiums.

Although Mauna Kea last erupted in 2460 BCE, the potential for renewed activity is high. Neighboring Mauna Loa volcano has erupted approximately every six years for the past 3,000 years.

Astronaut photograph ISS045-E-89403 was acquired on November 1, 2015, with a Nikon D4 digital camera using an 800 millimeter lens, and is provided by the ISS Crew Earth Observations Facility and the Earth Science and Remote Sensing Unit, Johnson Space Center. The image was taken by a member of the Expedition 45 crew. The image has been cropped and enhanced to improve contrast, and lens artifacts have been removed. The International Space Station Program supports the laboratory as part of the ISS National Lab to help astronauts take pictures of Earth that will be of the greatest value to scientists and the public, and to make those images freely available on the Internet. Additional images taken by astronauts and cosmonauts can be viewed at the NASA/JSC Gateway to Astronaut Photography of Earth. Caption by William L. Stefanov, NASA-JSC.