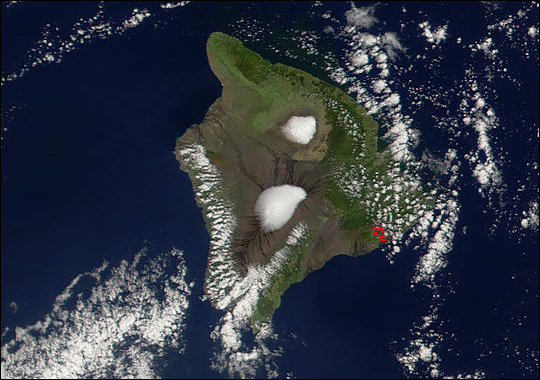 Snow caps the summits of Mauna Loa (center) and Mauna Kea (toward the top, center) volcanoes on the island of Hawai‘i. With its summit standing roughly 17 km (56,000 feet) above its base and its flanks covering about half of the Island of Hawai‘i, Mauna Loa is the world’s largest volcano. According to the U.S. Geological Survey, Mauna Loa’s peak rises roughly 4 km above sea level, its flanks slope downward another 5 km to the ocean floor, and then it is so massive it compresses the sea floor another 8 km!

Meanwhile, toward the island’s southeastern shore, the ongoing eruption of Kilauea continues. The red boxes indicate the location of the lava flow from the volcano’s Pu‘u ‘O‘o cone, which has been erupting since 1983.

This true-color image was acquired by the Moderate-resolution Imaging Spectroradiometer (MODIS), flying aboard NASA’s Terra satellite, on February 28, 2002.