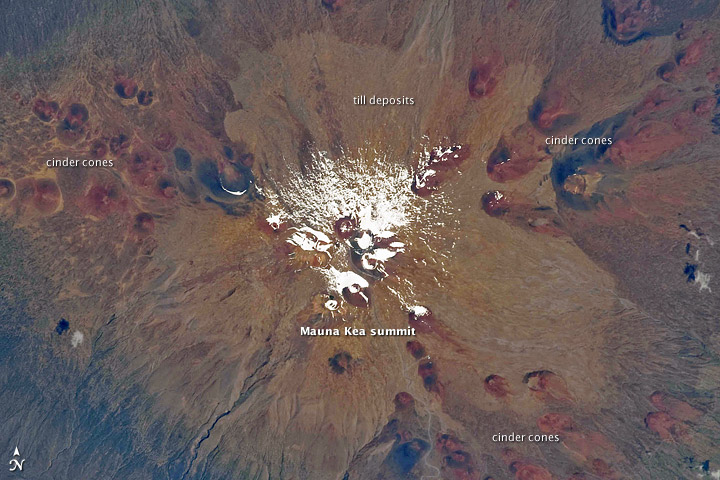 The island of Hawaii is home to four volcanoes monitored by volcanologists: Mauna Loa, Hualalai, Kilauea, and Mauna Kea. Mauna Kea is depicted in this astronaut photograph; of the four volcanoes, it is the only one that has not erupted during historical times. The Hawaiian Islands chain, together with the submerged Emperor chain to the northwest, forms an extended line of volcanic islands and seamounts that is thought to record passage of the Pacific Plate over a hotspot (or thermal plume) in the Earth’s mantle. Areas of active volcanism in the southern Hawaiian Islands today mark the general location of the hotspot.

This detailed astronaut photograph illustrates why the volcano is called Mauna Kea (white mountain in Hawaiian). While the neighboring Mauna Loa volcano is a classic shield volcano comprised of dark basaltic lava flows, Mauna Kea experienced more explosive activity during its last eruptive phase. This covered its basalt lava flows with pyroclastic deposits. In addition, former glaciers at the summit of the volcano left till deposits—sediments deposited directly in place as the glacial ice melted. The majority of these deposits are visible as light brown areas to the north and southeast of the white snow at image center. Numerous small red to dark gray cinder cones are another distinctive feature of Mauna Kea. The cinder cones represent the most recent type of volcanic activity at the volcano.

Astronaut photograph ISS019-E-11922 was acquired on April 28, 2009, with a Nikon D2Xs digital camera fitted with a 400 mm lens and is provided by the ISS Crew Earth Observations experiment and the Image Science & Analysis Laboratory, Johnson Space Center. The image was taken by the Expedition 19 crew. The image in this article has been cropped and enhanced to improve contrast. Lens artifacts have been removed. The International Space Station Program supports the laboratory to help astronauts take pictures of Earth that will be of the greatest value to scientists and the public, and to make those images freely available on the Internet. Additional images taken by astronauts and cosmonauts can be viewed at the NASA/JSC Gateway to Astronaut Photography of Earth. Caption William L. Stefanov, NASA-JSC.