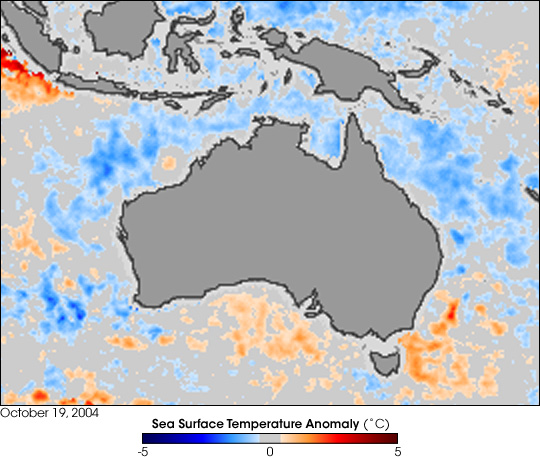 Recent satellite measurements of sea surface temperature all around Australia’s northern coastline reveal that the ocean is colder than average. These waters are situated near the center of the area known as the “Indo-Pacific Warm Pool.” While these are typically some of the warmest ocean waters on Earth, measurements acquired on October 19, 2004, by the Advanced Microwave Scanning Radiometer for EOS (AMSR-E), aboard NASA’s Aqua satellite, show that the region is anomalously cool.

Should this cool sea surface temperature anomaly linger for many days or even weeks, it will suppress normal atmospheric convection (upward movement of warm, moist air) which generates thunderstorms and large cloud systems—the predominant source of rain in this part of the world. If that proves to be the case, scientists warn that Australia and Indonesia could experience drought conditions as summertime approaches in the Southern Hemisphere. Moreover, parts of Australia and Indonesia could be in for another severe wildfire season.

The Return of El Niño