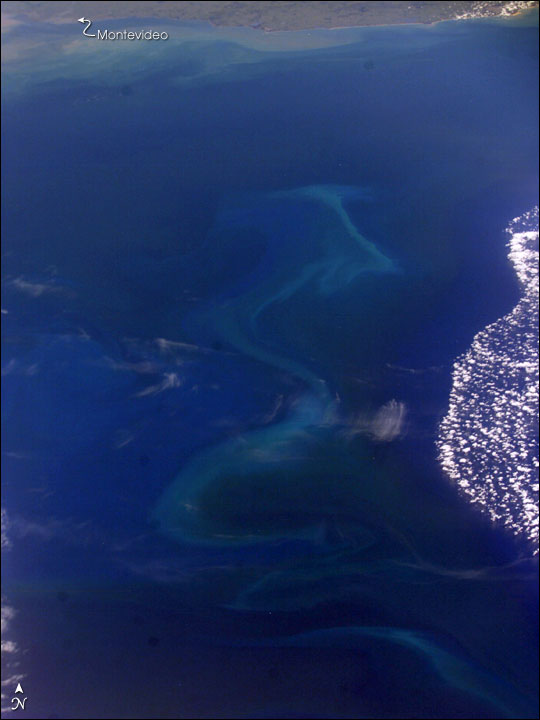 The South Atlantic Ocean off the coast of Argentina and Uruguay is a rich mixing bowl of different water masses. The nutrient-rich waters from the combined Paraná and Uruguay Rivers empty into the South Atlantic through the Rio de la Plata. Under the right conditions, especially in spring and early summer, the nutrients fertilize the offshore surface waters allowing for large plankton blooms.

The patterns of the interfaces between these water masses is complicated and dynamic. One of the objectives of International Space Station crew members is to document regions of plankton blooms. These images can be combined with other data sources such as the Sea-viewing Wide Field-of-view Sensor (SeaWiFS) and the Moderate Resolution Imaging Spectroradiometer (MODIS). Space Shuttle and International Space Station photographs frequently supply higher levels of detail than satellite imagery because the astronauts use cameras equipped with long telescopic lenses. In this case, the image is oblique (the spacecraft was approximately 45 degrees south), so exact field-of-view and resolution determinations are difficult. However, we estimate the resolution of the near part of the bloom to be between 50 to 100 meters per pixel. If a station crew can capture blooms on successive days or weeks, scientists may be able to determine something about the finer structure of the interacting water masses, the conditions necessary for blooms, and the evolution of the blooms over time.

Astronaut photograph ISS008-E-6009 was taken November 14, 2003, with a Kodak DCS760 digital camera equipped with an 80 mm lens and provided by the Earth Observations Laboratory, Johnson Space Center. The International Space Station Program supports the laboratory to help astronauts take pictures of Earth that will be of the greatest value to scientists and the public, and to make those images freely available on the Internet. Additional images taken by astronauts and cosmonauts can be viewed at the NASA/JSC Gateway to Astronaut Photography of Earth.

The South Atlantic Ocean off the coast of Argentina and Uruguay is a rich mixing bowl of different water masses. The nutrient-rich waters from the combined Paraná and Uruguay Rivers empty into the South Atlantic through the Rio de la Plata. Under the right conditions, especially in spring and early summer, the nutrients fertilize the offshore surface waters allowing for large plankton blooms. This unique image captures traces of several different water masses just southeast of Montevideo, Uruguay, and the Rio de la Plata. Close to the coast of Uruguay, the muddy fresh water plume snakes along the coast. Farther offshore, broad swirls of light blue-green and darker water mark a bloom of plankton. To the right, deep blue water covered by puffy clouds suggests another, warmer water mass just north of the bloom.

Rio de la Plata is the muddy estuary of the Paraná and Uruguay Rivers, and forms part of the border between Argentina and Uruguay. The rich estuary supports both capital cities of Buenos Aires and Montevideo. This image provides a snapshot of the complicated mixing in the Rio de la Plata between the fresh river waters and the water of the South Atlantic.

Acquired November 10, 2009, this true-color image shows peacock-hued waters swirling off the coast of Chile, north and south of Punta Lavapié.