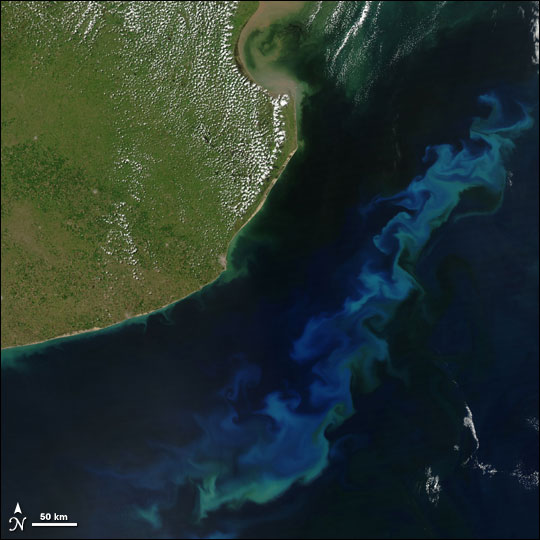 Many factors combine to make the Atlantic Ocean off the coast of Argentina a highly productive ecosystem. In this region, cool, nutrient-rich water from the Antarctic mixes with warm, salty water flowing south from Brazil. The water is turbid where the two currents meet, and the churning waters bring additional nutrients to the surface. Yet another source of nutrients is the Rio de la Plata, the wide estuary through which the Paraná and Uruguay Rivers empty into the ocean. Brown clouds of iron-rich sediment from the Rio de la Plata are visible along the top edge of the image. The infusion of fresh water from the rivers also carries agricultural run-off and other nutrients into the ocean. Between the upwelling created by the converging currents and the flow of nutrients from the Rio de la Plata, the waters of the South Atlantic are a paradise for marine life ranging from fish to microscopic surface plants.

The brilliant swirls of green and blue shown in this image attest to the productivity of the South Atlantic Ocean off Argentina. The colors have been created by millions of tiny plants, phytoplankton, growing in the surface waters. Chlorophyll and other pigments in the plants can give the water dark blue or green colors. Bright blue areas are often the result of the white, calcium carbonate (chalk) scales of organisms called coccolithophores reflecting light through the top layer of the ocean. Phytoplankton are the base of the marine food chain.

The Moderate Resolution Imaging Spectroradiometer (MODIS) on NASA’s Aqua satellite captured this image on March 5, 2006. The large image provided above is at MODIS’ maximum resolution of 250 meters per pixel. The image is available in additional resolutions from the MODIS Rapid Response Team.