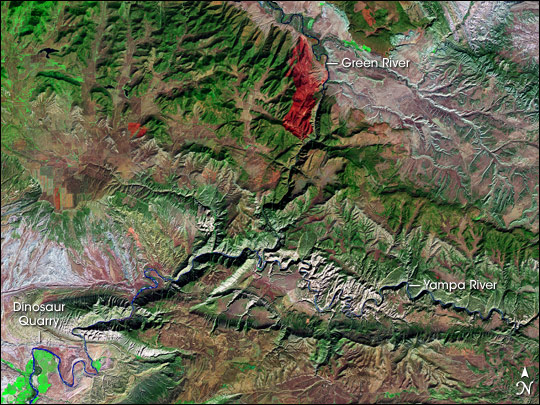 Dinosaur National Monument straddles the borders of Colorado and Utah along the banks of the Green and Yampa Rivers. The park covers 210,000 acres and is famous for the dinosaur fossils found there. The paleontologist Eric Douglass made the first discoveries here in 1909, and President Woodrow Wilson proclaimed it as a national monument in 1915. However, the quarry site is only a small part of the park, which is dominated by canyonlands, river rapids, and a diverse collection of wildlife. The park is popular with white-water rafters, hikers, and campers. The park land also was historically used by a number of Native American tribes; sites in the park have petroglyphs and other archeaological evidence of past inhabitants.

This Landsat 7 image of the monument shows the deep canyons carved into the landscape by the Green and Yampa rivers. In this false-color image composite, rich greens show areas of vegetation, while brown and pale pinks are more arid areas with less ground cover. The dramatic, deep red strip on the west side of the Green River appears to be a burn scar from a forest fire. The brilliant light green patches in the south west (bottom left) portion of the image are center-pivot irrigation patches just outside of the protected land. Their circular shape is more obvious in the large version of the image.

The Enhanced Thematic Mapper Plus (ETM+) instrument on Landsat 7 aquired this scene on October 5, 2000. This false-color composite was created by combining shortwave infrared, near infrared, and green wavelength (ETM+ bands 7, 4, & 2).