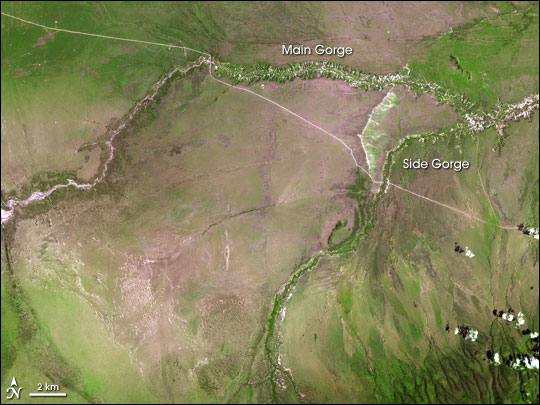 Olduvai Gorge is a 50-km-long (30-mile), 90-meter-deep (295-foot) ravine located in the eastern Serengeti Plains of northern Tanzania, within the Ngorongoro Conservation Area. According to geologists, the region’s gradual accumulation of lake sediments punctuated by sudden deposits of layers of volcanic ash and lava over several million years provided excellent conditions for preserving fossilized remains of plants and animals. Subsequent faulting due to seismic forces during the Pleistocene era followed by slow and steady erosion from wind and water runoff have cut a slice through these rock strata, granting scientists access to a treasure trove of precious geological and archeological clues to the region’s ancient history.

This simulated natural-color image of Olduvai Gorge was acquired on February 1, 2001, by the Advanced Spaceborne Thermal Emission and Reflection Radiometer (ASTER) aboard NASA’s Terra satellite. The full-resolution image covers an area of 35.3 x 37.6 km, and is centered near 2.8 degrees south latitude and 35.1 degrees east longitude.

Olduvai Gorge attracted widespread attention among archeologists in 1959 when Louis and Mary Leakey discovered the fossilized skull of zinjanthropus, a human ancestor that scientists believe lived in the region 1.8 million years ago. Discoveries in the 1970s of 3.5-million-year-old footprints left by animals and early hominids added to the archaelogical significance of the site. Since the 1970s, the fossilized remains of more than 150 species of extinct mammals were found preserved in the ravine’s rock strata, as well as birds, reptiles, amphibians, fish and many types of plants. Archeologists have also extracted many ancient human relics from Olduvai Gorge—including tools and hand axes fashioned from stones and bones—as well as the skeletal remains of early hominids, estimated at more than a million years old, and a complete Homo Sapien skeleton dated at roughly 17,000 years old. Speculation that the gorge might be situated near a settlement region for humanity’s earliest civilization has led some to nickname it the “Cradle of Mankind.” Meanwhile, ongoing research in the gorge continues to yield new insights into what life was like for our earliest ancestors.