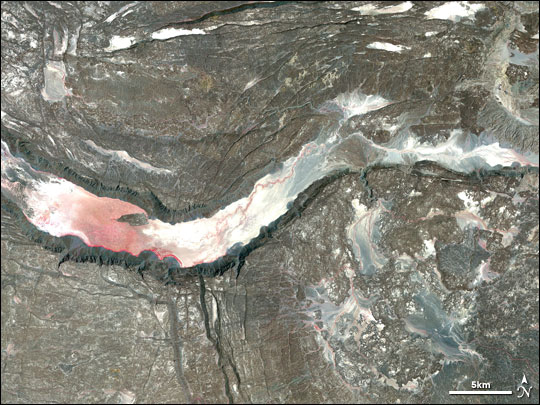 The pulling apart creates enormous stress on the rock, producing cracks, faults, volcanoes, fumaroles (gas vents), escarpments, and hot springs in the region along the border of Ethiopia, Eritrea, and Djibouti. In this image, the gray-brown, ancient, basalt rock of the region is crisscrossed by cracks both small and large, many of which are filled with salt and sand, though in this infrared-enhanced satellite image, the tinge of red indicates some hardy vegetation eking out a living in the harsh terrain. The large river-like feature running horizontally across the scene is actually a geologic feature called a “graben,” a gulley created not by erosion of a river but by the sinking of the ground when earth on either side pulls apart.

Besides its unusual geology, the Afar region is famous for its fossils. On November 24, 1974, a team of American paleoanthropologists led by Donald Johanson discovered a fossil hominid of a young adult female only a meter tall. While the team examined the find, the Beatles song Lucy in the Sky with Diamonds played on the radio, and the team decided unanimously to call the fossil “Lucy.” Years later, she got her formal scientific designation: Australopithecus afarensis. Radiometric dating of underlying volcanic rocks placed Lucy’s age at 3.2 million years old.