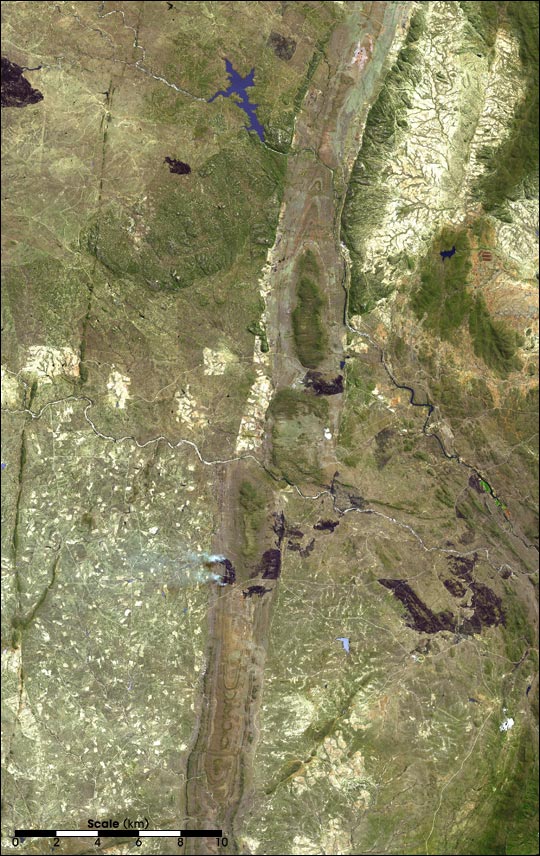 The Great Dyke in the southern Zimbabwe Craton is one of the most remarkable rock formations in the world. A “craton” is a term geologists use to describe Earth’s oldest continental regions. These thick and very hard layers of rock are more than 2 billion years old, and form the cores of most of Earth’s continents. Over the millennia, the cratons comprising Earth’s landscapes were transported, twisted, folded, eroded, and split by the tremendous geological forces continually reshaping our world’s land surfaces.

Zimbabwe’s Great Dyke, running vertically through the center of this scene, probably formed slowly, over centuries, as molten rock forced its way up from the Earth’s interior through the Zimbabwe Craton. The dyke stretches about 530 km across the craton and varies from between 3 and 12 km wide long its length. The dyke is extremely rich in platinum and chromium deposits that support the Zimbabwe economy.

This simulated natural color image covers an area of 62.2 x 39.2 km, and is located at 20.3 degrees South latitude, 29.7 degrees East longitude. The scene was acquired on August 29, 2000, by the Advanced Spaceborne Thermal Emission and Reflection Radiometer (ASTER) instrument aboard NASA’s Terra satellite. Several burn scars (reddish-brown patches) bruise the landscape in this scene, including the aftermath of a fire that is still burning atop the dyke in this scene. The twin plumes of gray smoke billowing westward mark the location of the fire, situated toward the bottom center of the image.