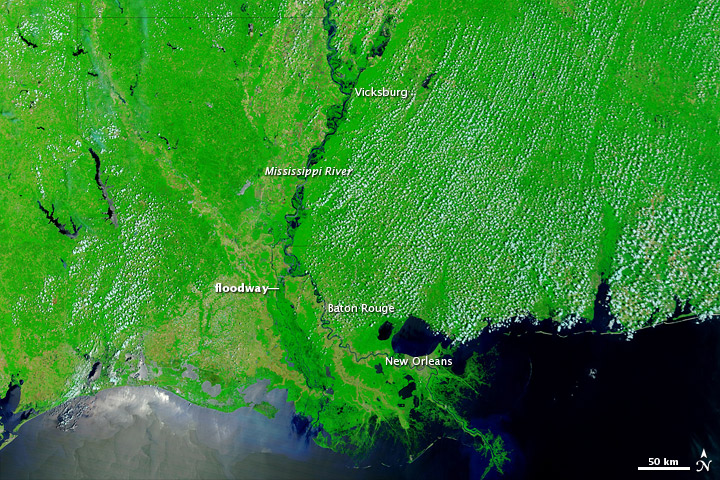 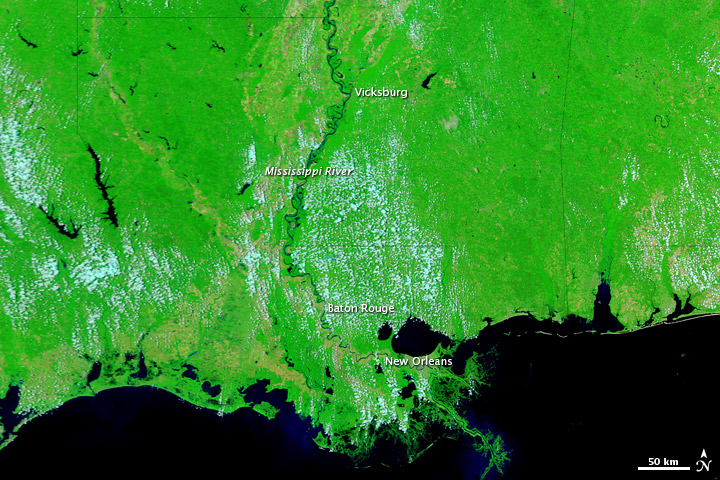 The Lower Mississippi River remained swollen at the beginning of June 2011. The Moderate Resolution Imaging Spectroradiometer (MODIS) on NASA’s Terra satellite captured the top image on June 1, 2011. The bottom image, from May 28, 2010, shows the river just over a year earlier.

These images use a combination of visible and infrared light to increase contrast between water and land. Water ranges in color from gray-blue to navy. (Ocean water in the southwest appears silvery blue on June 1, 2011, due at least in part to the angle of sunlight.) Vegetation is green. Bare ground is brown. Clouds are pale blue-green and cast shadows.

The Advanced Hydrological Prediction Service (AHPS) of the U.S. National Weather Service reported that the Mississippi River at Baton Rouge reached 43.29 feet (13.19 meters) at 3:00 p.m. local time on June 1. This level was below the city’s record flood level of 47.28 feet (14.41 meters) set in 1927. As of June 1, the water level at Baton Rouge was projected to decline slowly through June 6, but still remain at major flood stage.

The AHPS reported that the Mississippi River at Vicksburg reached 52.08 feet (15.87 meters) at 3:00 p.m. local time on June 1, having receded from the historic crest reached on May 19, 2011, of 57.1 feet (17.4 meters). The Mississippi remained at major flood stage in Vicksburg on June 1, but was expected to recede to moderate flood stage by June 6.

As of June 1, the AHPS reported, the Mississippi River had not flooded at New Orleans.

Besides a swollen Mississippi, the image from June 1, 2011, shows some water in the Morganza Floodway west of the river. Water channeled into this floodway was visible to MODIS by May 18, 2011.