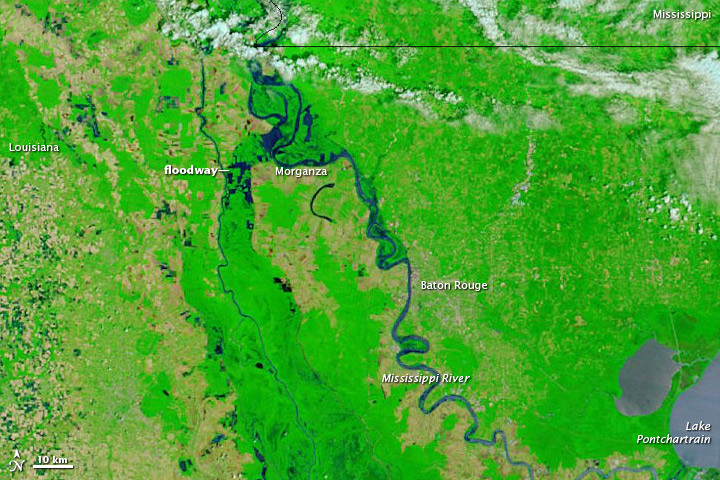 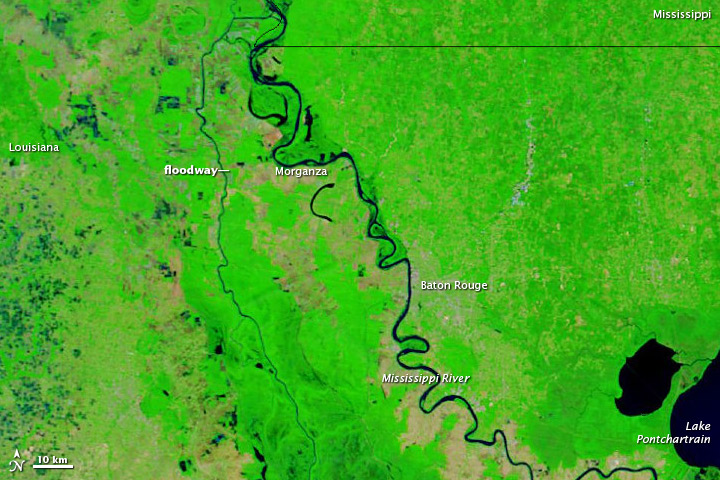 On May 18, 2011, the Moderate Resolution Imaging Spectroradiometer (MODIS) on NASA’s Terra satellite observed water in the Morganza Floodway of Louisiana. As the U.S. Army Corps of Engineers notes, the floodway is designed to ease water levels in downstream communities along the Mississippi by diverting some water into the Atchafalaya Basin.

MODIS acquired the top image on May 18, 2011, and the bottom image on May 4, 2011. Both images use a combination of visible and infrared light to increase contrast between water and land. Water ranges in color from gray-blue to navy. (Lake Pontchartrain appears silvery blue on May 18 due largely to the angle of sunlight.) Vegetation is green. Bare ground is brown. Clouds are pale blue-green and cast shadows.

Both images show flooded conditions along the Mississippi River. A significant difference between the images, however, is the water visible in the Morganza Floodway on May 18. The Army Corps of Engineers reported that the discharge in the floodway was 114,000 cubic feet per second on May 18, the floodway’s fifth day of operation in 2011.

The Advanced Hydrological Prediction Service (AHPS) of the U.S. National Weather Service reported that the Mississippi River at Baton Rouge reached 44.85 feet (13.67 meters) at 2:00 p.m. local time on May 18. This level was below the city’s record flood level of 47.28 feet (14.41 meters) set in 1927. As of May 18, the Mississippi River was projected to remain at roughly the same level at Baton Rouge through May 23.