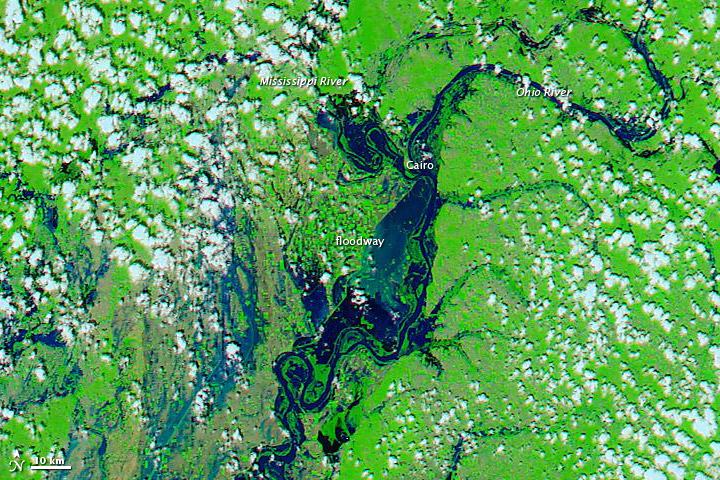 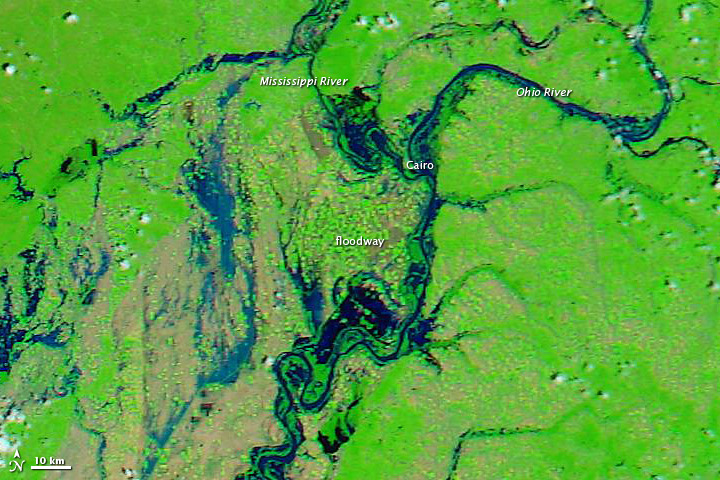 Late on May 2, 2011, in an effort to spare Cairo, Illinois, the U.S. Army Corps of Engineers used explosives to breach a protective levee near the confluence of the Ohio and Mississippi Rivers. As predicted, the two-mile hole in the levee flooded 130,000 acres of nearby farmland in what is known as the Birds Point-New Madrid Floodway.

The Moderate Resolution Imaging Spectroradiometer (MODIS) on NASA’s Aqua satellite captured these images of the area on May 3, 2011 (top), and April 29, 2011 (bottom). Both images use a combination of visible and infrared light to increase contrast between water and land. Water ranges in color from electric blue to navy. Vegetation is green. Clouds are pale blue-green and cast shadows onto the land surface below.

Tiny squares of green in the April 29 image show that the floodway consists of farmland. The image from April 29 also shows flooded conditions along the Ohio and Mississippi Rivers. (See an image from 2010 for a comparison.) In the image acquired on May 3, the floodway downstream of Cairo is submerged. The same day that MODIS acquired the image, the Advanced Hydrological Prediction Service of the U.S. National Weather Service reported that the water level for the Ohio River at Cairo had dropped, although it still remained at major flood stage.