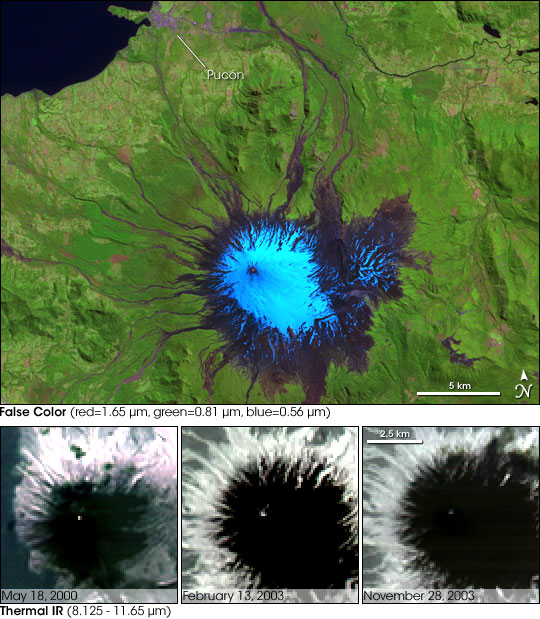 The top image above is a false-color satellite image (Bands 4-3-1) collected over Volcan Villarrica (Chile) on February 13, 2003, by the Advanced Spaceborne Thermal Emission and Reflection Radiometer (ASTER) onboard NASA’s Terra spacecraft. The inset images are thermal-infrared composite images centered on the volcano’s summit. Also acquired by ASTER, these images show Villarrica over a roughly four-year period of time.

Located deep within the Chilean central Andes, Volcan Villarrica has a long history of strong volcanic activity. Since 1971, Villarrica has had numerous eruptions that resulted in large ash emissions and mudflows (lahars). The image shows snow on the upper flanks of the mountain, but the snow is absent from the summit due to the active lava lake. In addition, the image reveals lava flows, mudflows, and ash deposits from previous eruptions. Among these features are the 1972 and 1984 lava flows located along the volcano’s south and northwest flanks, respectively. The close proximity of the town Pucón (15 kilometers north of Villarrica) illustrates the significant hazard that volcanoes can pose to humans.

The series of ASTER thermal composite images above shows the persistent thermal anomaly at the summit. The series shows some slight variation over time. Dark regions are cool (mostly snowpack on the mountain’s upper reaches), while white shows warmer locations, including the lava at the summit and exposed rock faces at lower altitudes.