erupted, sending lava down its flanks and releasing a cloud of volcanic ash. A glowing hot spot and a faint volcanic plume suggest that, although the volcano had quieted since September 30, its activity had not completely stopped."> 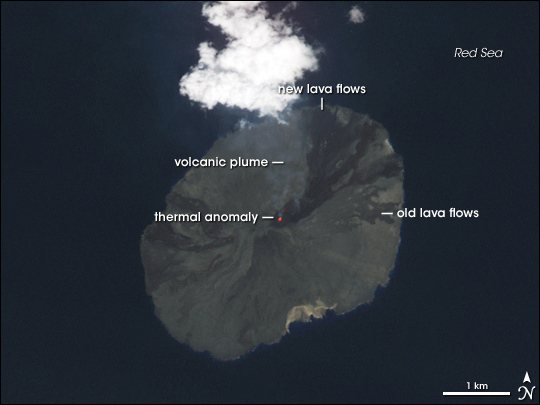 On the evening of September 30, 2007, Jebel at Tair erupted, sending lava down its flanks and releasing a cloud of volcanic ash. On October 8, 2007, the Advanced Spaceborne Thermal Emission and Reflection Radiometer (ASTER) on NASA’s Terra satellite acquired this image. A glowing hot spot and a faint volcanic plume suggest that, although the volcano had quieted since September 30, its activity had not completely stopped.

ASTER measures not only light visible to human eyes, but also infrared light, enabling the sensor to detect thermal anomalies caused by substantial temperature differences. The bright red spot at the summit is such an anomaly, and it suggests hot lava associated with ongoing volcanic activity. Immediately to the north of the summit is a small faint red streak, another thermal anomaly that appears to flow down the volcano’s slope. At the same time, a nearly transparent plume emanates from the summit up toward a cloud. Water content of the volcanic plume could be responsible for this cloud, although clouds do routinely form over summits, even when the volcanoes are not active.

On September 30, 2007, NATO ships in the region reported a spectacular “light show” complete with fountains of lava. Dark rivulets of rock in this image indicate an apparent lava flow in the northeast quadrant of the island, moving in the same direction as the faint thermal anomaly near the summit. These dark deposits likely resulted from the recent eruption, and contrast with the paler shades of older lava flows.

Jebel at Tair is a stratovolcano—a steep-sloped cone composed of alternating layers of ash, lava, and rocks produced by earlier eruptions. The latest eruption is a continuation of activity on this island, where explosive eruptions were recorded in the eighteenth and nineteenth centuries.

Jebel at Tair is known by multiple names and spellings. It has alternately been referred to as Jabal al-Tair, Jabal al-Tayr, Tair Island, Al-Tair Island, Djebel Teyr, and Jibbel Tir.

You can download a 15-meter-resolution KMZ file of Jebel at Tair suitable for use with Google Earth.