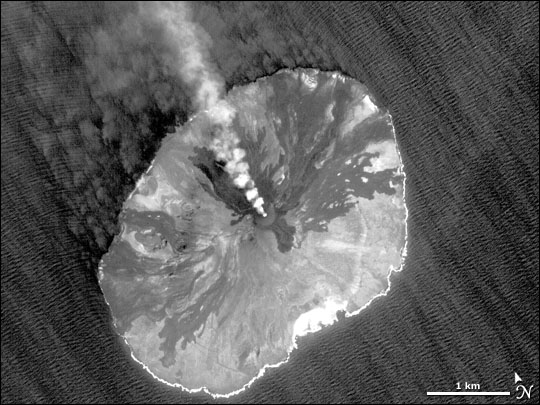 Jebel at Tair, a small volcanic island in the Red Sea, which had erupted in late September 2007, released a volcanic plume on November 8, 2007. The Advanced Land Imager (ALI) on NASA’s EO-1 captured this image the same day. In this image, volcanic plume appears as billowing puffs of white emanating from the summit. Evidence of earlier lava flows appears as dark stains on the volcano’s slopes.

Midway between Yemen and Eritrea, Jebel at Tair is a stratovolcano composed of alternating layers of hardened lava, solidified ash, and rocks ejected by previous eruptions. Jebel at Tair is known by multiple names and spellings. It has alternately been referred to as Jabal al-Tair, Jabal al-Tayr, Tair Island, Al-Tair Island, Djebel Teyr, and Jibbel Tir.