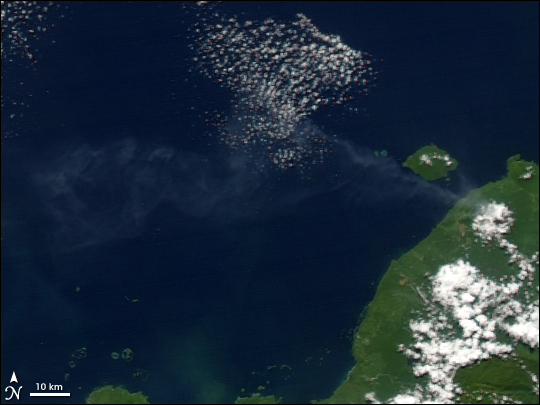 The Ulawun Volcano on the island of New Britain released a faint plume on May 25, 2006. The Moderate Resolution Imaging Spectroradiometer (MODIS) on NASA’s Aqua satellite took this picture the same day. In this image, a faint plume moves away from the island toward the northwest. Clouds often collect over volcanic summits, and the volcanic plume in this image is much fainter, thinner, and darker than the clouds.

One of Papua New Guinea’s most active volcanoes, Ulawun is a stratovolcano comprised of hardened layers of lava, ash, and rocks ejected by previous eruptions. The volcano’s recorded eruptions date back to the early 18th century. Starting in the 1970s, a series of large eruptions changed the summit’s crater by producing flows of lava, rock fragments, and ash.

Ulawun emitted a plume on May 25, 2006. Emissions continued for several days.