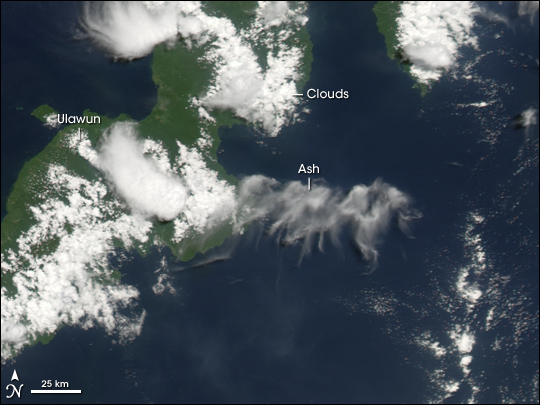 The Ulawun Volcano in Papua New Guinea’s West New Britain emitted a plume of volcanic ash and steam beginning on March 21, 2006. The Moderate Resolution Imaging Spectroradiometer (MODIS) flying onboard the Aqua satellite captured this image on March 22. In this image, the volcano’s summit is partially obscured by clouds, but ash can be seen blowing eastward, away from the island. The ash is only slightly darker than the nearby clouds.

One of Papua New Guinea’s most active volcanoes, Ulawun is a stratovolcano comprised of hardened layers of lava, ash, and hot rocks spewed out by previous eruptions. Known to locals as North Son, the volcano towers over the north coast of New Britain. The volcano’s recorded eruptions date back to the early 18th century. Starting in the 1970s, a series of large eruptions changed the summit’s crater by producing flows of lava, rock fragments, and ash.