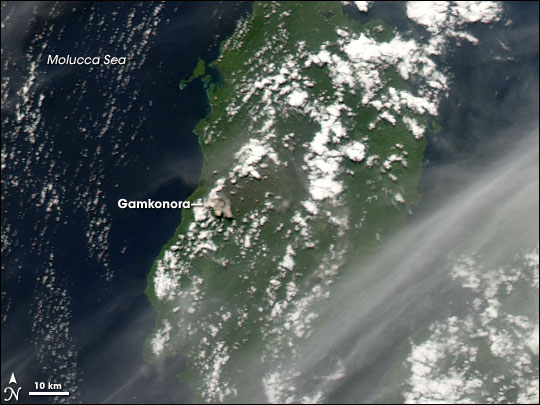 On July 7, 2007, the Gamkonora Volcano on Halmahera, Indonesia, began releasing plumes of ash, according to a report from ABC News, Australia. Over the next few days, the volcano continued its activity, including ejecting flaming rocks. The activity forced the evacuation of some 8,600 residents. At 14:50 East Indonesian Time on July 9, the volcano erupted, according to ReliefWeb.

The Moderate Resolution Imaging Spectroradiometer (MODIS) flying on NASA’s Aqua satellite captured this image of Gamkonora releasing a volcanic plume on July 10, 2007. Clouds obscure much of the view, but the plume’s beige color distinguishes it from the surrounding clouds.

Gamkonora is a stratovolcano composed of alternating layers of hardened lava, solidified ash, and volcanic rocks left by previous eruptions. Rising to a height of 1,635 meters (5,364 feet), it is the highest peak on the island of Halmahera. Its largest recorded eruption occurred in 1673, accompanied by tsunamis that overwhelmed nearby villages.

You can download a 250-meter-resolution KMZ file of Gamkonora suitable for use with Google Earth.