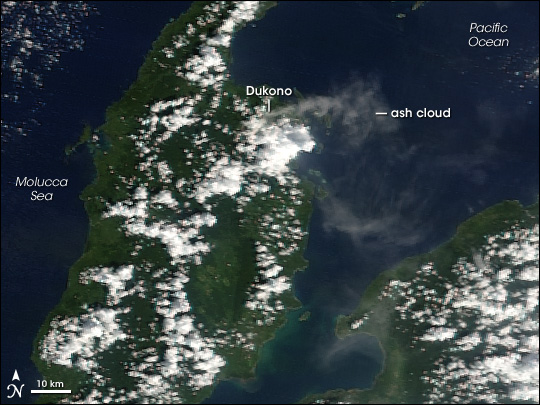 Dukono Volcano on Halmahera, Indonesia, released a plume of ash and/or steam on December 5, 2006. The Moderate Resolution Imaging Spectroradiometer (MODIS) flying onboard NASA’s Terra satellite captured this image the same day. In this image, Dukono’s ash plume peeks out from under fluffy white clouds clustered over the volcano’s summit.

In the remote regions of the island of Halmahera, Dukono is a complex volcano with more than one kind of landform. Between the 1930s and the 1990s, routine observations showed nearly continuous explosive eruptions.

A 250-meter-resolution KMZ file of the volcanic plume is available for use with Google Earth.