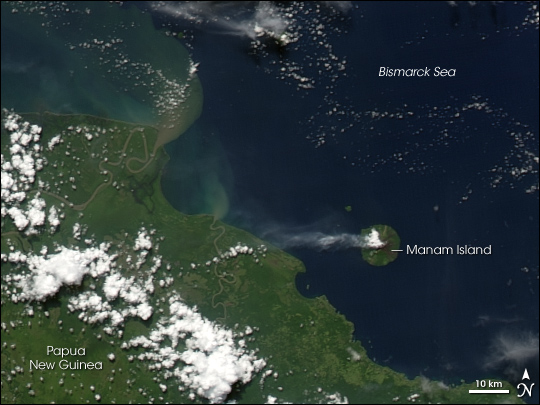 The volcanic island of Manam, located off the coast of mainland Papua New Guinea, released a plume beginning on June 17, 2007. The Moderate Resolution Imaging Spectroradiometer (MODIS) on NASA’s Aqua satellite captured this image on June 18. In this image, the plume blows eastward from the tiny island toward the mainland. The plume’s pale color suggests that it contains more water vapor than ash. At the summit is a particularly bright white puff, which could be part of the plume or a cloud. (Clouds often collect at volcanic summits.)

Manam is a stratovolcano composed of alternating layers of hardened lava, solidified ash, and rocks ejected by previous eruptions. The 1,807-meter (5,928-foot) island is one of Papua New Guinea’s most active volcanoes.

You can download a 250-meter-resolution KMZ file of Manam for use with Google Earth.