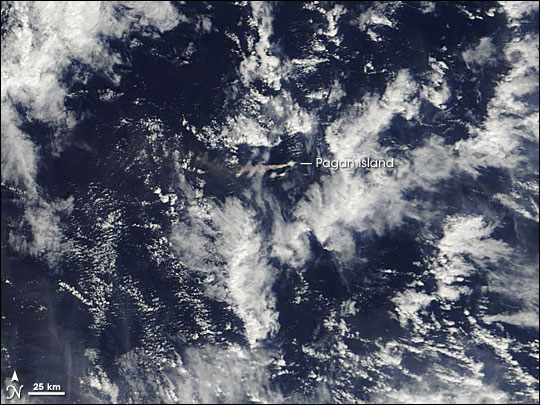 Pagan Island released a plume of ash and/or steam in early December 2006. The Moderate Resolution Imaging Spectroradiometer (MODIS) flying onboard NASA’s Terra satellite captured this image of the volcano on December 6, 2006. In this image, the plume appears slightly darker than the nearby cloud cover. While the clouds are white, the plume is pale beige. Winds blow the plume to the west, and it quickly dissipates over the Pacific.

Pagan Island is one of the most active volcanoes in the Mariana Islands. The island includes two stratovolcanoes composed of layers of hardened ash and lava, and consolidated volcanic rocks. In the north is Mount Pagan, which is 570 meters high. In the south is South Pagan, which is 548 meters high. Recorded eruptions dating back to the 17th century have all come from the north volcano.