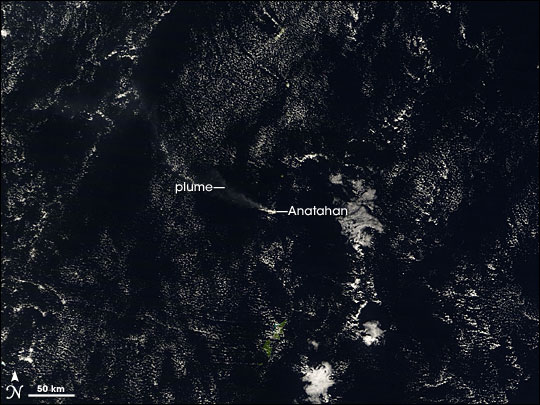 On December 30, 2007, Anatahan Volcano began releasing a plume. This image, acquired by the Moderate Resolution Imaging Spectroradiometer (MODIS) on NASA’s Terra satellite, shows the volcanic island on December 31, its second straight day of activity. Dwarfed by clouds overhead, the diminutive island releases a faint, fuzzy plume that blows west-northwest over the Pacific Ocean. According to a December 31 bulletin released by the U.S. Air Force Weather Agency, the plume consisted primarily of steam and gas, with little ash content, and the pale hue of the plume in this image supports that report.

Just 9 kilometers (5.6 miles) long, Anatahan is a stratovolcano composed of alternating layers of hardened lava, solidified ash, and rocks ejected by previous eruptions. The volcano experienced an explosive eruption in May 2003, and remained intermittently active well into 2006. Until the late December plume, the volcano was largely quiet during 2007.