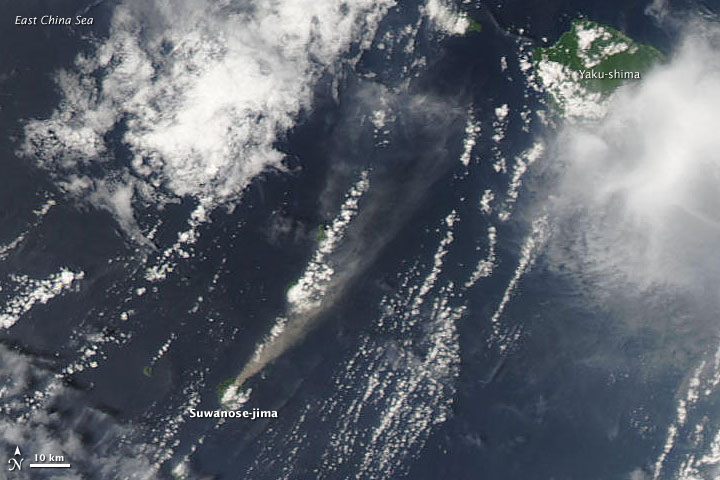 Suwanose-jima in Japan’s Ryukyu Islands released plumes of ash and steam in early July 2009. The Moderate Resolution Imaging Spectroradiometer (MODIS) on NASA’s Aqua satellite captured this image on July 5, 2009. A beige plume from the volcano fans out as it heads northeast toward the island of Yaku-shima. According to a bulletin from the U.S. Air Force Weather Agency on July 6, 2009, a faint ash plume from Suwanose-jima had traveled 10 nautical miles (18.5 kilometers) northeast of the island.

Suwanose-jima is an 8-kilometer- (5-mile-) long, spindle-shaped, sparsely populated island. It is a stratovolcano composed of alternating layers of hardened lava, solidified ash, and dark gray volcanic rocks left over from previous eruptions. The volcano experienced strombolian eruptions—low-level explosive bursts of incandescent rocks—from 1949 to 1996. After 1996, the volcano’s periods of quiescence lengthened, but it remains one of Japan’s most active volcanoes.