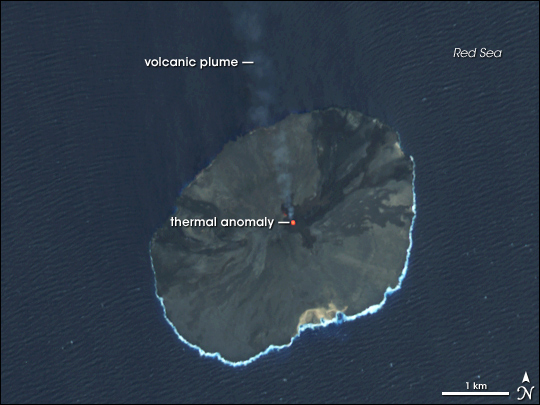 Jebel at Tair, a volcanic island in the Red Sea, erupted at the end of September 2007. The eruption released lava and ash, and created a spectacular light show, according to observers in the area. On October 15, the Advanced Spaceborne Thermal Emission and Reflection Radiometer (ASTER) on NASA’s Terra satellite acquired this image. This shows a largely quieted volcano releasing only a faint volcanic plume.

Jebel at Tair is a stratovolcano—a cone composed of alternating layers of ash, lava, and rocks from earlier eruptions. The latest eruption is a continuation of activity on this island, where explosive eruptions were recorded in the eighteenth and nineteenth centuries. The volcano is known by multiple names and spellings, including Jabal al-Tair, Jabal al-Tayr, Tair Island, Al-Tair Island, Djebel Teyr, and Jibbel Tir.

You can download a 15-meter-resolution KMZ file of Jebel al-Tair suitable for use with Google Earth.